Home Arkansas Election News School Texarkana Just 22 people voted for a new school tax in Texarkana, Arkansas, but it won anyway as only 16 voted against it

Just 22 people voted for a new school tax in Texarkana, Arkansas, but it won anyway as only 16 voted against it 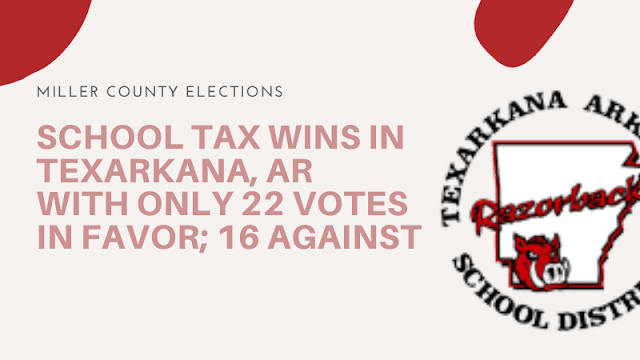 A school tax measure was approved by Texarkana, Arkansas voters with only 38 total votes cast in the election on Tuesday, according to unofficial results from the county clerk's office.

The power of such a small amount of people will surprise many citizens in the Texarkana area as unofficial results make it appear that a 7-person family could have turned the entire election into a "no" vote on the school tax.

With the unofficial vote total released by the County Clerk of Miller County, the school tax election in Texarkana, Arkansas, passed with 22 people voting for the proposed tax (57.89%) and 16 people voting against it (42.11%).

The County Clerk's office told us that this school tax election did not increase taxes and was more administrative in nature.

Miller County has a population of about 44,000 people, and Texarkana is its largest city and county seat.

See related story about two TASD school board members, each elected with less than 9 votes each.  Click here to read.