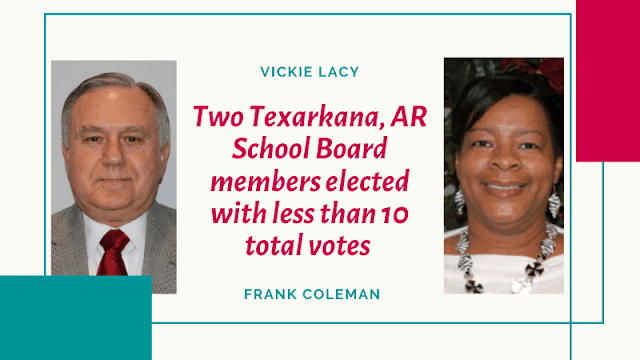 Vickie A. Lacy, who was unopposed, triumphed in TASD 4 Zone 4 with 6 total votes and 100% of the vote with unofficial vote totals released by the County Clerk of Miller County.

In his first election after being appointed in 2018, Frank B. Coleman, Jr., who was unopposed, was elected with a total of 8 votes and 100% of the vote.

There are only 7 members on the TASD School Board, so the two members who were elected represent approximately 30% of the total school board.

In Fouke's school board election, Drew Chandler was unopposed and received 218 votes in Place 5.

The race will now be decided in a runoff between Attaway and Patterson.

The Texarkana, Arkansas School District has about 4,500 students and approximately 330 teachers.

See related story about TASD school tax passing on Nov. 5, 2019, with only 22 votes in favor and 16 against. Click here to read.