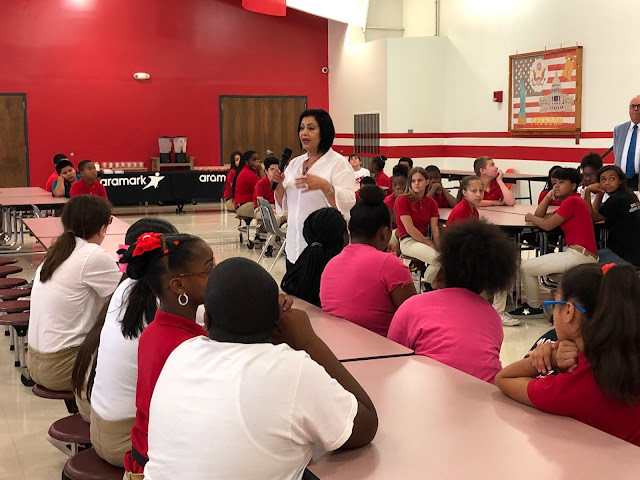 However, its relationship to Hispanic heritage is still new to many in the United States concerning "Day of the Dead."

Mexican Consul Rodolfo Quilantan-Arenas and his wife, Patricia, brought the context together in a Hispanic Heritage Month assembly Sept. 27 at BHE.

“All the month of September we have celebrated civic events,” Consul Arenas said.

The national date of Mexican independence is celebrated each Sept. 15 to commemorate the conclusion of the Mexican war of independence from 1810-1821, he said.

But, the rise of Dia de Muertos, celebrated Oct. 31 – Nov. 2, as characterized in the animated Disney film, is an example of cross-cultural growth between Mexico and America, Mrs. Arenas, a professional educator, explained.

She said the convergence of the Hispanic holiday with the traditional Roman Catholic “All Hallows Eve” and its Anglicization as Halloween mistakenly combines two separate cultural ideas.

“It is two different things; it is to honor the memory, the love of the dead,” Mrs. Arenas said. “It is a way to say, ‘I love you, and I remember you.’"

The whimsy associated with Dia de Muertos is not one of the flights of fantasy as is Halloween, she said; but, instead, with a celebration of family and its lasting value.

That, Mrs. Arenas pointed out, is part of what has taken hold in the United States as the celebration has spread.

“We have our own traditions,” she explained. “It’s important to know because we need to know where we are and where we need to go.”

Such cross-cultural connections have been present throughout the history of the two countries, Arenas said.

But, their value has only come to be recognized as the world, in general, has shrunk through technology.

“Did you know the largest single consumption of avocados is in the United States on one day?” Arenas said. “It is on Super Bowl Sunday.”

Other connections include music, he said.

“Did you know the best mariachi band is not in Mexico?” Arenas asked. “It is in America.”

Soccer, he said, is the fastest growing sport in public schools in America.

“There are many connections between the two countries,” Arenas said.

Arenas, who has been in the Mexican Foreign Service since 1985, currently represents Mexico from consular offices in Little Rock which encompass portions of eastern Texas, Oklahoma, western Tennessee and all of Arkansas in its outreach.