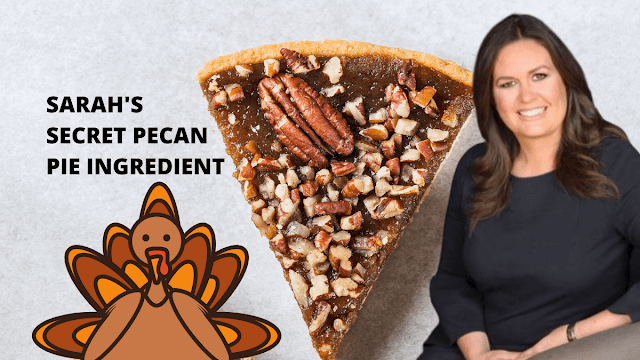 
For some reason, White House press corps doubters, including CNN contributor April Ryan, did not seem to believe President Trump's press secretary was capable of making pies herself, and the incident was dubbed #piegate on social media.


The problem was that Sander's photo of her pie seemed "too perfect" to some — almost like it was a stock photo. As it turned out, this was because Sanders said she has always relied on store-bought pie crusts.


Now, the daughter of former Arkansas Governor and Beech Street pastor Mike Huckabee has lots of extra time for holiday cooking as her duties as a Fox News contributor don't take near as much time as being press secretary for a busy president.


The pie's secret ingredient: This morning, Sarah shared the reason her chocolate pecan pie is always so well received: Crushing the pecans with a hammer!

"Trust me. It's the secret to the success," said Sanders. "It makes it a lot better on the top, and I think it also helps me involve the kids. My boys love to do the pecan crushing. That's their big role in the pie-making."

"I am definitely making the pecan pies," she added. "I'll have to get my hammer out later today to get them ready."

But there is one more carefully guarded secret to the chocolate pecan pie that was disclosed today:

Nope, you probably weren't expecting that!

Sarah does not drink bourbon but she uses it in the recipe.

As many home chefs know, vanilla used in holiday recipes is at least 70 proof (or 35% alcohol). Experts say the liquor will basically cook out of the pie. They say that sugar is more of a problem than the alcohol.

Two versions of the same pie: "I usually make two pies — one that the kids get to eat and the family members who don't like bourbon in their pie and one that has the bourbon in there," Sanders said. "I balance it out, so everyone comes away happy."

What Sarah is thankful for: "I'm most thankful for my family... and that I will be able to sit down with them tomorrow," Sanders said.

Sarah Huckabee Sanders said she is also thankful that she gets to live her life as a real American after being so busy in recent years.

"It has been a crazy and wild few years, so it's nice to slow down and get to have that time. We're really excited to all get-together," Sanders told Fox News on Wednesday.