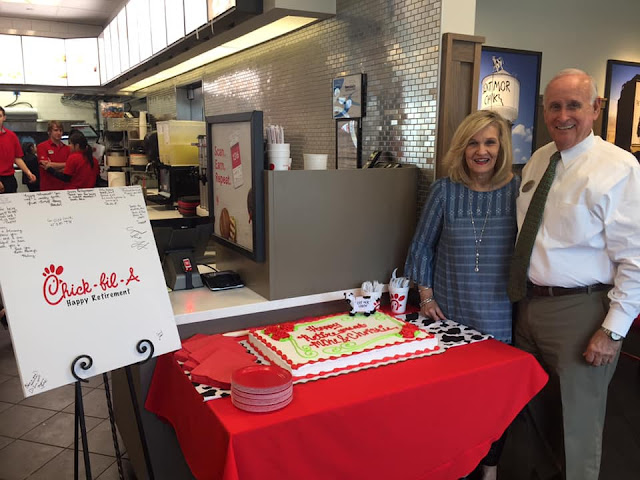 One of the most popular pair of restaurateurs in Texarkana - and probably the entire Ark-La-Tex - retired after 38 and a half years of service to the Texarkana region - first at Chick-fil-A in Central Mall and then for more than 15 years at a freestanding Chick-fil-A location on Richmond Road.

Mike Dodson and Christie Dodson stood as a symbol of quality food, friendly service and cleanliness for almost four decades, and the announcement on Facebook of their retirement drew an amazing outpouring of goodwill of a business life well-lived with almost 2,000 reactions, 600 comments and 250 shares.

We had hoped to talk to Mike Dodson in person but decided not to interrupt his post-retirement turkey hunting trip. Nevertheless, we found a great alternative. As people may know, Mike is a humble guy about his business success, so we were thrilled to talk to his general manager Misty Flowers. Like the hundreds of people on Facebook, she had a lot of positive and interesting things to say.

"When he left, I felt like I was losing my dad - not my boss," Flowers said. "I'm 32, and Mike hired me from the worksite trailer he was using in 2003 when the [Richmond Road] restaurant was being built."

Flowers, who started as a cashier and worked her way up to general manager, reiterated the familial relationship that Mike Dodson had with his staff: "He praised me...but he also scolded me when I needed it - just like a dad."

Mike and Christie Dodson had a well-deserved retirement party on March 29 that was attended by Chick-fil-A operators from around the Ark-La-Tex. The couple has been an inspiration to countless young people who worked for them throughout the years and now live successful lives in Texarkana, the Ark-La-Tex and beyond.

Indeed, the influence of Mike and Christie Dodson will live on in at least three ways 1) Business skills taught to former employees - who still credit them for their success today 2) Goodwill shared with hundreds of thousands of customers over the years and 3) The newly-remodeled Richmond Road Chick-fil-A restaurant which still offers delicious chicken sandwiches and waffle fries served in a squeaky clean restaurant with a great big smile.

It's a legacy that anyone would be proud of and that the people of Texarkana will never forget.