TEXARKANA IS TITLETOWN: Thinking back on past and present football talent from Pleasant Grove, Texas High, Arkansas High and Liberty-Eylau 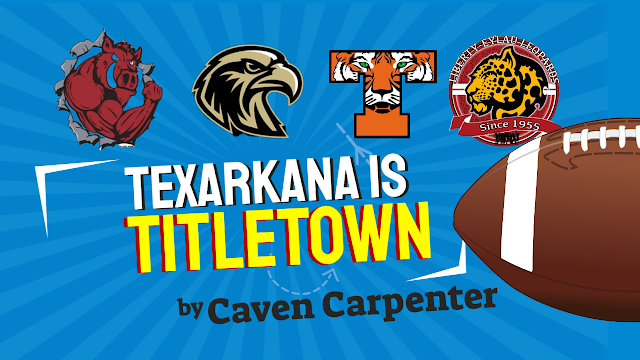 On Saturday, Pleasant Grove plays its first away game of the playoffs against the Salado, Texas Eagles.


Columnist Caven Carpenter gives his opinion of the Hawks' lineup along with this weekend's other all-important Arkansas High and Texas High matchups:


This week, the Pleasant Grove Hawks travel to their home away from home: The Ford Center at The Star in Frisco, Texas.

Some have even nicknamed The Star as "Pleasant Grove West."  Trust me, it actually said that on Wikipedia around this time last year.


On Saturday, The Hawks will take on the Salado Eagles from District 8 in the second round of the Texas high school football playoffs. Salado, Texas is in Bell County between Austin and Temple.


Anyone who is a follower of high school football or a fan of all things Texarkana would have to be living under a rock not to feel the intense buzz around town about PLAYOFF FOOTBALL.


Between the holiday season and playoff football, it's little wonder that I have trouble sleeping.  I LOVE IT!

One topic that is often discussed at my home — and I’m sure at many others — is the strength of high school football in Texarkana now versus in the past.

Can you name a town the size of Texarkana that has as many football state championships spread over four schools?

Nope. I didn't think you could. And this week's games are all going to be big.

For anyone who doesn't already know, the Arkansas High Razorbacks play host to Morrilton on Friday.

Across the state line, the Texas High Tigers play host to Frisco Independence at Tiger Stadium at Grim Park.

This is the game that follows the Tigers' SPECTACULAR upset of #5 Lufkin. But, for the record, the stadium is and always will be GRIM STADIUM to me.


From Tiger to Hawk

Most people who know me will understand that I bleed Pleasant Grove BLACK AND GOLD.

I was born into the Texas High Tiger family because my mom, Penny Carpenter, was a graduate; my grandmother was a TISD teacher; and Dad was a coach under the legendary Watty Myers.

My older brother, Rob Carpenter, played in the Tiger Band, so we never missed a game.

One of my fondest early sports memories was the 1979 game of Texas High vs Odessa Permian on a hot, Saturday afternoon at Grim Stadium. I’m pretty sure there was not an empty seat to be found.

This column would be a mile long if I named all the great players that came and went from Texas High.

Of course, the same could be said about Arkansas High, Liberty-Eylau, and Pleasant Grove too.

Do you want to play a game? Or maybe wait and have some fun before or after eating your turkey and dressing (no, it’s not called "stuffing") next week?  Let's try it — just for fun with no arguing or name-calling.

THE GAME: The Texarkana Football Super Team of All Time
Here are the rules:
1. Pick players based only on what they did in high school — not college or pro!
2. Pick one player from each position, including one quarterback, two running backs, three receivers (tight ends included), and five offensive lineman.
3. Defense: Pick four defensive lineman, three linebackers, and four defensive backs.
4. Pick one kicker and one punter.
5. Pick one head coach.

So which players do you choose?

Who will you have at QB? Will it be Ryan Mallett, Mike Cherry, or maybe Ben Harmon?

What about running back? LaMichael James, or maybe Dennis Johnson… see how much fun this could be?

Of course, this could become controversial among Texarkana football mega-fans at Thanksgiving. So, remember, this is for fun.

One thing I am sure of:  No matter who you pick, I would bet my house that there is no other city the size of Texarkana within 500 miles that could beat this team!

The Salado Eagles come into Round Two this week with a record of 8-2.

They are coached by Allan Haire, and they run a very familiar style of offense: the Slot-T.

Now, I'm no expert on the Slot-T — even though I readily acknowledge it is similar to what the Hawks run: the Wing-T.

In the Slot-T, there are two running backs lined up behind the quarterback.

But you won't find as much motion compared to the wingback in the Wing-T.

1. Salado will look to run the ball right at the Hawks with very little passing. Now, I know what you are thinking: "This will play right into the strength of the Hawks." You're right, it will.

3. But the key player will be inside linebacker, #23 Dylan Hopkins.  Dylan will have to be disciplined when dealing with the pulling lineman and fake handoffs.

4. Salado is very good at what they do!  Just like the Hawks and the Wing-T, they are disciplined and very well-coached. I do not see them making many mistakes, but they will try to get the Hawks to jump off-sides and not play gap control defense.

5. When Pleasant Grove is on offense, look for the "same old, same old."  The Hawks will have more speed and size, but the key will be playing smart with minimal penalties and blown blocking assignments. I have said it before, but I look for #2 Bruce Garrett to run wild.

6. Maybe one of the biggest keys of the game will be The Star itself. This will be the Eagle's first time to play at the Ford Center at the Star. When a kid sees that big, blue, Dallas Cowboy Star in the middle of the field, it can be quite distracting. The Hawks, on the other hand, have been there, done that.

This will be PG’s sixth game at The Star, and the Hawks hold a 4-1 record, plus two games at The Mothership — otherwise known as AT&T Stadium in Arlington.

If Tom Landry himself walked down the sideline, I don't think it would faze these disciplined Hawks!

Best places to eat in Frisco

Wow, there are so many choices! But here are my picks:

1. Babe's Chicken – 6475 Page St. Frisco, TX.  Here you will find the best fried chicken and biscuits in the Metroplex.  Food is served family-style with all the fixings.  Get there early because there is always a wait!
2. Restaurants at The Star
The restaurants at The Star are VERY close to the front door of the Ford Center. So it is an easy walk.

OH, BY THE WAY... Speaking of distractions that I talked about earlier: The Dallas Cowboy Cheerleaders will be performing their Christmas show in the plaza!

I look for a Texarkana sweep on Friday and Saturday!