Miracles do happen: The remarkable story of Texarkana's newest church 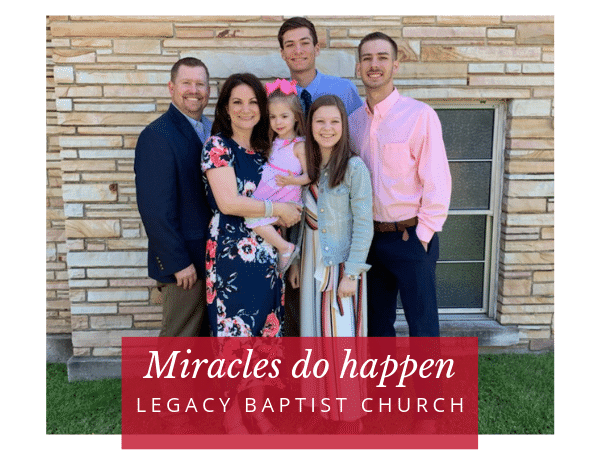 Even the most informed Texarkana citizen could be excused for not having heard of Legacy Baptist Church. That's because it's brand new.

Legacy started as a "church plant" in January when it began meeting at the Wyndham Garden hotel on State Line Avenue in Texarkana, Texas.

But the church quickly needed more room and negotiated to share church facilities with the congregation of Oaklawn Baptist Church on New Boston Road.

Today, less than eight months later, Legacy Baptist Church is the proud owner of its own church building with approximately 130 to 150 weekly attendance — and the church is 100% debt-free.

So how did a church that began meeting in a conference room of a local hotel in January come to own a church with more than 3 acres in property and have no debt?

Donnie Edwards, Pastor of Legacy Baptist Church, has the answer: He says it's all part of God's plan.

Donnie Edwards exudes sincerity and is only 46. But he has the youthful vigor of someone 15 or 20 years younger.

Maybe it's the excitement and bold optimism that made him a popular pastor in Paris, Texas where he served for many years before deciding to move back to the Texarkana area a few months ago.

Previously, Edwards was a youth pastor at Richmond Road Baptist Church in Texarkana, Texas for two and a half years, and he also served at First Baptist Chuch Genoa for seven years. Later, he pastored in Mena before moving onto Paris, Texas.

"We have people who follow our ministry from Mena to Paris to Texarkana," Edwards said.

Even though Pastor Donnie is relatively young, he has been in a pastoral role since he was about 16 years old. If you do the math, that's 30 years of ministry.

In Paris, Edwards was the senior pastor of East Paris Baptist Church which broadcast his sermons on 7 radio stations. He was also involved with ongoing missionary efforts in Haiti.

The pastor has high ambitions for Legacy Baptist Church, too. "Our goal is to start adding radio stations and have satellite campuses as well," he said.

The church family and immediate family

Pastor Donnie is excited about his new church home in Texarkana.

"The congregation is predominantly millennials around 22 to 35 and many who are in their mid-thirties," he said. "But we do have all ages."

Edwards has been married to his wife Amanda for 21 years, and she is a graduate of Liberty-Eylau High School. She recently received a teaching degree and began a new job at Wake Village Elementary School this summer.

The couple has four children: Cameron, 21; Blake, 19; Olivia, 15, and Gracyn, who the couple welcomed to the family through adoption just a few years ago.

According to Pastor Donnie, the blending of his immediate family and his Legacy family has been seamless.

Therefore it's fitting that Edwards' motto should be "Love, Life, Legacy,"

He added: "We're here to live the abundant life that Jesus gave to us."

Buildings are expensive, and local churches in the Ark-La-Tex often spend more than a million dollars to obtain property and build-out church campuses.

So how did a "church plant" go from no church about a month ago to a paid-for church building on three and a half acres in the Genoa-Texarkana, Arkansas area today?

Since Pastor Donnie had previously served in Genoa, many people had been telling him about the church building that was formerly Tennessee Baptist Church.

Pastor Donnie said the building owners wanted a Baptist church to move into the building. There was just one problem for Legacy: The sanctuary could only hold around 120 people.

But then Legacy Baptist was offered a price on the property they couldn't refuse: The church building on more than three acres for just $20,000 (photo below).

The only problem was that Legacy Baptist was a new "church plant" only had about $3,000 in the bank — not the $20,000 plus closing costs it needed.

News of possibly securing a church building excited the members of Legacy Baptist Church, and two donations were received for $2,500 each.

"Then, a donor came through with a $15,000 donation," Pastor Donnie said with excitement. "We were ready to go."

Nevertheless, there was still a problem with the size of the sanctuary.

Since Legacy Baptist has upbeat praise and worship-style service, the church decided to try and move to a more open concept in the sanctuary by removing the pews.

The pew removal would allow up to 180 people to be seated — instead of approximately 120 before.

Also, one more blessing came to the church: A $5,000 donation was graciously offered to buy the seating that was needed.

Legacy Baptist Church did not immediately move into the new property. For two weeks, they prepared the building and surrounding area for the church's arrival.

"We sort of remodeled," Pastor Donnie said. "By taking out the pews and doing other things, we made it more contemporary. It was a more traditional setting previously."

Edwards said the church still needs to complete a little more than $5,000 to $7,000 in various repairs. But if history is any guide, another donation could be on the horizon.

The feedback Legacy Baptist Church has received has been overwhelmingly positive, the pastor said.

"We're pumped to hit 130 to 150 attendance after only meeting for 8 months," Pastor Donnie said. "A lot of people are excited we're back, and we already have possible speaking engagements and mission endeavors."

And where some of the opportunities locally have come from has surprised Pastor Donnie.

"Some people who are now coming up with ideas to partner with us were kids when I was at Genoa," Edwards said. "Now, they have kids."

But he is most proud of the spirit of the new Legacy Baptist Church.

"These people are on fire for God right now," he said. "It feels unreal. We have a great community of believers."

For now, the church is settling into its new building, but it is already planning outreach into the community to feed the mind, bodies, and souls of people right here in the greater Ark-La-Tex region.

So try not to be surprised the next time you hear something interesting about Legacy Baptist Church — the "church plant" that was meeting in a local hotel conference room earlier this year and now owns it's own church building and property with no debt.

Indeed, the church's mission is to share Christ with the community through a variety of means. "A life worth living is a legacy worth leaving," Edwards said.

And Legacy Baptist Church may very well continue to prove that miracles do happen for many decades to come.

Editor's note: Legacy Baptist Church meets at 703 S Rondo Rd on Sunday mornings from 10 am to 11:30 pm with a  youth service on Sunday evening from 6 pm to 7:30 pm. On Wednesday, Legacy offers a kid's service from 6 pm to 7:30 pm. Pastor Donnie Edwards told us: "On Tuesday we do a meal at 6 pm and then go into adult Bible study afterward until about 7:30 pm. It's a creative schedule, but we find that many of our members work on the weekends."