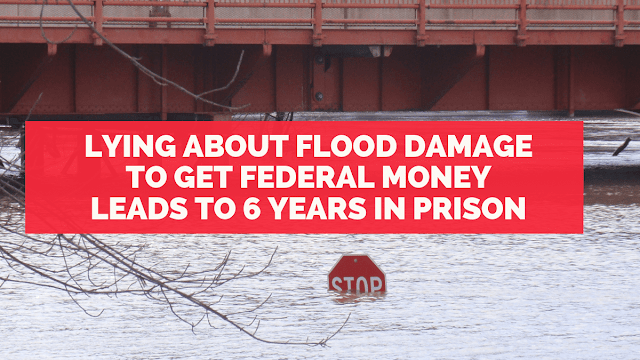 Don't lie about damage to your property to obtain federal money, because you might end up with a long federal prison sentence.

Chad Lightfoot, 47, was sentenced by U.S. District Judge Terry A. Doughty, who presided over the trial in this case. Judge Doughty also ordered the defendant to pay $23,684.71 in restitution to FEMA and a $10,000 fine. Lightfoot was convicted on March 14, 2019, after a four-day trial.

Evidence presented at trial showed that, after a federal disaster was declared on March 13, 2016 following severe flooding in Monroe, Louisiana, Lightfoot applied for disaster grant assistance with FEMA for damage to property he owned on South Fourth Street in Monroe.

Lightfoot listed the property as his primary residence, when in reality, the property was abandoned and unoccupied and he lived in the New Orleans area.

Prior to the property’s inspection by FEMA on March 30, 2016, Lightfoot obtained a Louisiana Identification Card to appear as though he lived there.

He also submitted a fraudulent bill to FEMA from Cox Communications to establish proof of occupancy. A Cox representative testified at trial that Cox does not provide services in Monroe.

As a result of his fraudulent claims, FEMA sent Lightfoot $23,684.71 for home repairs, rental
assistance, and personal property. Lightfoot also submitted two appeals to FEMA, which included $115,669 and $122,500 in repair estimates.