A drug addicted mother, foster care and youth detention in Oklahoma didn't stop Alton Carter from turning is life around 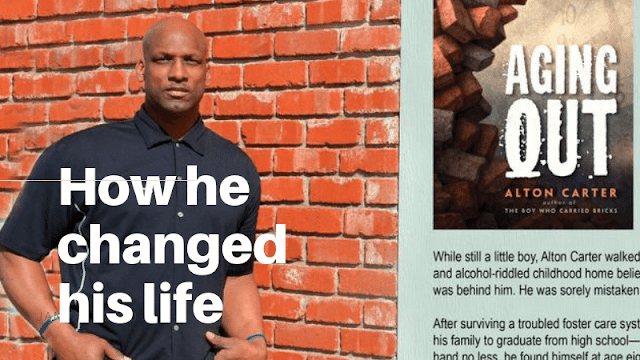 He is now an author of a prize-winning autobiography, a motivational speaker and a youth minister in Stillwater, Oklahoma. But life didn't start out easy for Alton Carter.

Punishment at the Oklahoma youth ranch was carrying armloads of bricks, but Alton Carter carried a lot of bricks before he realized he could choose hope to define his life.

“You are not here to save these kids; that is impossible,” said Carter, who told his life story to a crowd of more than one thousand people at Hempstead Hall in Hope on Thursday. “You are here to give them a seat of hope.”

“I learned the day the judge told my mother she was not fit that I would never have a judge say I was not fit to be a father,” Carter said.

The audience loudly applauded his message of self-worth and dedication to choosing better role models and positive decisions.

Born the second of five children, Carter was raised by a mother who was drug-addicted and consorted with multiple men whom he and his siblings believed to be their biological fathers.

He recounted life in a home populated by four siblings, three uncles, his mother, an alcoholic grandmother, and his hard-working grandfather as tragic.

“My grandfather was a model human being,” Carter said.

However, he said his grandmother would sleep in a chair and the kids would sleep on the hard floor.

“My uncle Stevie would make us drink alcohol. He would wake us up in the middle of the night and drive us in his ratty car into town,” Carter said.

Once there, Carter said the boys were required to beg passing motorists into believing the car was out of gas and they needed “gas money” to get home.

Other times, Carter said, he and his brothers were made to rob Salvation Army collection bins at night for items which his uncle might sell for drinking money.

“I didn’t understand what I was carrying with me each day,” Carter said. “By the time I got to school, I was a mess.”

Carter said he continually reacted to a deep-seated impression of being worthless by lashing out until he began to learn the possibility of the choice to change himself when a teacher took him into her class and began to show him kindness.

“For the whole year, she didn’t treat me like a piece of trash,” he said. “Sometimes, we don’t know we are broken.”

Still, Carter said he reacted to the isolation of being Black in an all-white class by becoming a bully, forcing white students to lie in the playground mud.

When his teacher kept him from the playground, and he sat at the classroom window watching other children play at recess, Carter said he rebelled.

“I stood up and looked at her in the face and said, ‘You know I’m missing recess because I’m Black,’” Carter said.

The resulting laughter from the students in Hempstead Hall measured an understanding of Carter’s point.

“The color of my skin has nothing to do with my actions,” he said to applause. “I get to choose.”

Finally determined at age 10 to define his own life, Carter said he faced down his uncle’s nightly whiskey lineup, only to be severely beaten by his uncle and forced to flee for his life into the protection of children’s services.

That night put Carter into a different world, but not an entirely different context. He was sent to a maximum-security youth facility, where he learned at Christmas his family had abandoned him.

Finally, after his mother sent him an inexpensive watch one Christmas, Carter said he began to feel proud of himself, again; only to be faced with a bully who beat him almost daily for refusing to relinquish his watch.

“It was all I had from my family,” Carter said of his refusal to yield. “I learned since then, all-too-often I find people who are giving up more than the value of a cheap watch.”

Transferred to the first of three youth ranches, Carter endured the punishments of carrying armloads of bricks.

“You picked them up in both arms and held them while you walked; then, you put them down, turned around and picked them and walked back,” he said.

His perspective worsened when Carter was ultimately taken into foster care by the family of the man who was his “ranch dad.” He said the family attended church on Sundays, where Carter said everyone knew the man’s reputation for abuse but did nothing.

Finally, with an opportunity to visit his family for Christmas, Carter said he saved enough money to buy each family member a single gift, only to realize no-one had anything for him.

“Sometimes, when the heart is broken, it grows back crooked,” he said.

Carter said he fell back upon a defense mechanism to criticize others before they were able to mock him, recalling how he laughed at a bald spot on his younger brother’s head as his “on/off switch.”

Later, he came to regret the remark and his failure to apologize when he received a telephone call informing him of his brother’s death from an asthma attack.

“The last conversation I had with my brother was to make him feel bad,” Carter said.

Ultimately, Carter said, he learned from his grandfather, who was battling cancer, the equanimity to become the first in his family to graduate from high school; and, later, college.

“He gave me the power to decide what I thought of myself,” Carter said.

And, that resulted in his determination to carry forward with the promise he made to himself in court when he was separated from his mother. Carter said after he married and became a father, as he struggled to finish college, he learned he was dyslexic.

“I had to learn to ask for help,” Carter said. “Our job is to do what we can to rally around each other.”
A former Oklahoma State University police officer and graduate of OSU, Carter is the father of two biological sons, Kelton and Colin, whom he introduced to the crowd at Hempstead Hall.

He is also the adoptive father to three children from Texarkana.

“I’m not better or worse than anyone else,” Carter said. “I’m just unfinished.”

The assembly at Hempstead Hall for students in Hempstead County was sponsored through The Call in Hempstead and Nevada counties in cooperation with the Hope Public Schools and other county schools. The faith-based non-profit organization seeks to broaden understanding of foster care in Arkansas to find families willing to serve as foster parents