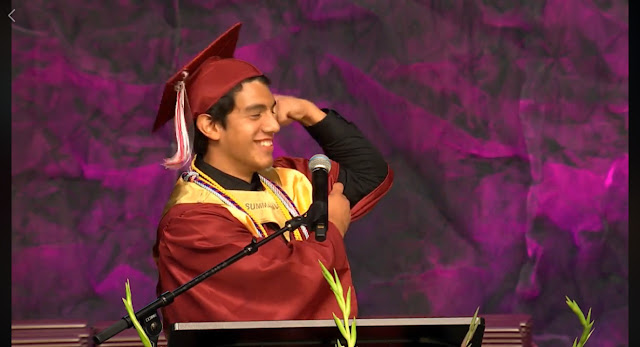 Liberty-Eylau valedictorian Kevin Garza did not give the ordinary, boring speech most expect at graduation ceremonies.

He presented a charming demeanor as he explained that he could have never imagined he would be standing in a church in front of a thousand people as valedictorian of his high school.

He even flexed for the audience as he thanked his baseball coaches for helping him build character — and muscles.

Garza gave significant credit for his accomplishments to salutatorian Paige McDonald, who was recently awarded a scholarship in the amount of $88,000 to Embry-Riddle Aeronautical University.

Indeed, Garza said Paige McDonald made him believe that he could achieve academic success, and it was a warm and thoughtful tribute to the young woman who received loud applause as she crossed the stage at First Baptist Church in Texarkana on Thursday evening.

Before he thanked a teacher who made him learn the quadratic formula, Garza gave the basis of his valedictory speech which was also a sage piece of advice:

"Don't flinch in the face of adversity," Garza said. "Adversity is inevitable. What you do when that adversity is thrown at you is what makes you who you are."

What great advice from an unlikely valedictorian helped by a good friend who encouraged him and became salutatorian.

The Liberty-Eylau Class of 2019 has many great stories like these which show perseverance, cooperation and results.

There is no greater complement for the graduates and the high school that produced them, than that.