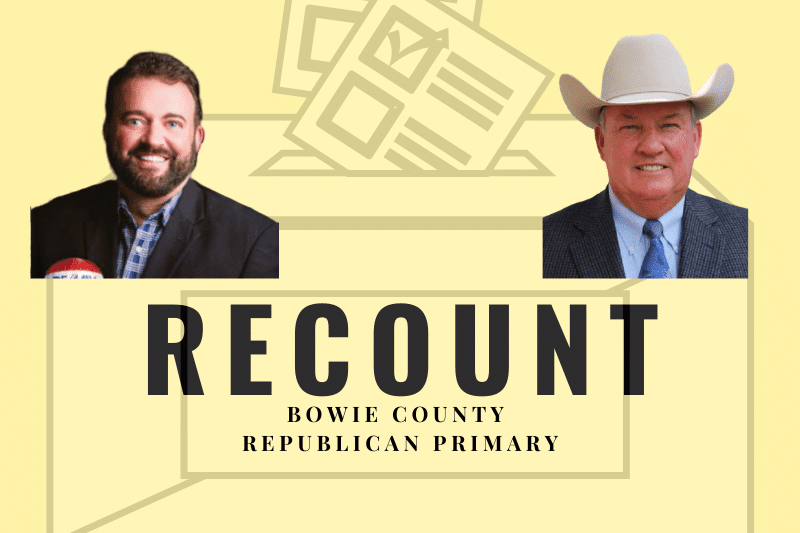 A recount will be held Saturday, March 14, for Bowie County Commissioner (Precinct 3) following a request by candidate Kyle Barrett.

Online chatter has been fierce about the Strain/Barrett contest.

Following the election, some supporters of Kyle Barrett have claimed that they were unable to vote in the commissioner's race, which was on the Republican ballot.

After speaking with numerous people involved in the election process, it is clear that some voters in the DeKalb area believed that they asked for a ballot with the local races and were confused when they received a Democrat ballot (without the ability to vote for commissioner, sheriff or judge).

What is not disputed by almost anyone is that there was confusion in the DeKalb area.

Citizens who voted at Oakgrove could only obtain a Democrat ballot and could not vote in the Republican primary where the local races were being determined.

This election cycle, all contested local races (such as Bowie County Sheriff, 5th District Judge and Commissioner of Precinct 3 between Barrett and Strain) were on the Republican ballot.

DeKalb was considered a stronghold for Barrett because he graduated from DeKalb High School and is well-known there.

Barrett also actively courted Democrat voters in DeKalb and asked them to vote for him in the Super Tuesday primary. This is nothing new. Almost every Republican candidate in every race asks at least some Democrats to cross over and vote for them in primary elections.

McCoy said party chairs chose the locations of the primary elections for their own party. That can only mean one thing: The Democrat Party chair decided to use the Oakgrove polling location, and the Republican chair did not.

The area surrounding Oakgrove Lighthouse Church is a Democrat-leaning area, and it is thought that the polling place was being used to increase voter turnout for the Democrat presidential primary election.

However, it seems that this led to confusion among voters who were more interested in the local races than the Joe Biden vs. Bernie Sanders presidential nomination race. However, a DeKalb-area Democrat wanting to vote in the Republican primary (for the local races) had to go to DeKalb High School to cast a ballot.

Because of the confusion, some voters believe they were told they couldn't vote in the Republican primary and/or believed they were not given the ballot they wanted.

Will a recount clarify anything?

A recount will not be able to determine how significant an issue voter confusion played in this election for the DeKalb area.

Recounting the votes will only determine the people who cast verified votes — not count the number of people who would have voted for either Strain or Barrett if they had a chance.

Either Strain or Barrett could contest the results in several different ways depending on the outcome of the recount.

Moreover, other serious allegations have been made about some alleged problems in the DeKalb area, It's possible that more information about this may come to light following the recount.

Out of an abundance of caution and fairness to all candidates, we will not discuss allegations that we have not been able to independently verify.

It must be mentioned that the long delay in reporting of Bowie County's election results also led to suspicion about the outcome of the commissioner's race. Final tallies were unknown until Wednesday morning following the Tuesday election.

When the new results are disclosed, there will be a better sense of where things stand.

Close elections are tough on everyone — especially when confusion or problems are discovered.

Whatever happens, the two candidates for Commissioner, Precinct 3, will deserve a little sympathy as even the eventual winner will receive some backlash.

But both can always be proud of a strong, almost-even finish.