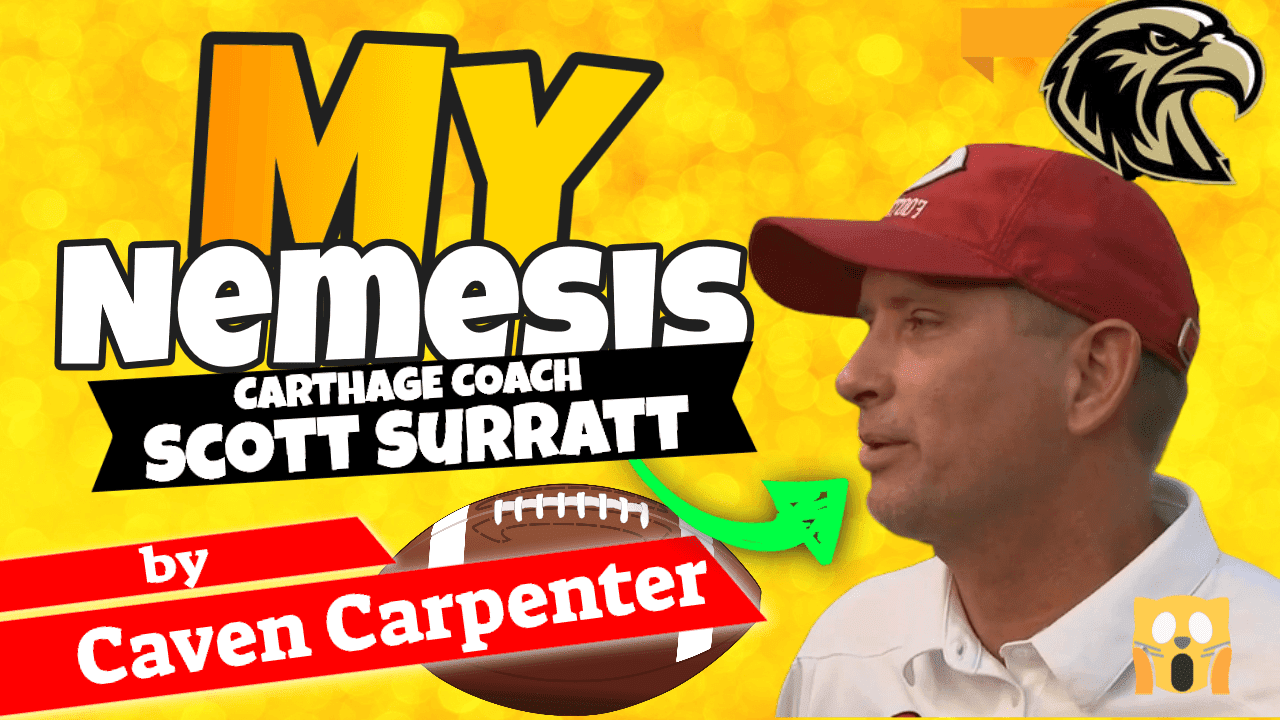 On Friday night, two of the top football teams in Texas meet at Hawk Stadium in Texarkana as Pleasant Grove takes on Carthage.

Caven Carpenter looks back on his first experiences with both teams' coaches and gives valuable insight that will shape how you watch Friday's matchup.

I often think about the Forrest Gump quote: “I don't remember being born. I don't recall what I got for my first Christmas, and I don't know when I went on my first outdoor picnic..."

As for me, I do remember a Friday night football game when I was playing for the PG Hawks in October 1985.


My teammates and I were just one yard away from victory. However, the anticipated victory was stopped in its tracks by the Linden-Kildare Tigers.

Who prevented our win?  You guessed it: my old nemesis, Scott Surratt.

For the one or two of you out there that don’t know, Scott Surratt is the head coach of the Carthage High School Bulldogs football team from Carthage, Texas in Panola County.

During his thirteen years at Carthage, Coach Surratt has become a legend in the state of Texas. That's because the Bulldogs have won a staggering six state championships in just twelve years.

Scott Surratt won’t say how many times he has turned down big-time college coaching jobs. But trust me, he has received a lot of significant offers.

So he has purposefully chosen to stay at Carthage.

A conversation with Coach Surratt

I had the real treat of getting to reminisce with Coach Surratt on Monday.

The coach and I talked about many hard-fought battles between Pleasant Grove and Linden-Kildare in days gone by.

One thing I never knew about Scott Surratt was his role in LK snatching the win from PG in 1985 that I mentioned at the beginning of this column.

Scott told me he had just started playing quarterback the week of that memorable game. He was usually the running back in a run-heavy offense.

However, he switched to QB, and the Tigers were now pass-heavy.

Scott Surratt was/is one of those guys we all love to hate.

You know the type: He’s good at absolutely everything, and you know that you're not.

He can beat you at football, baseball, golf, tennis, ping-pong... just about anything.

During our conversation, we both remembered one infamous baseball moment in our shared history.

It was May 1986 at George Dobson Field in Texarkana — the location where PG played home baseball games.

PG was facing Linden-Kildare for the baseball district championship.

In the 4th inning, Shane Wright was on the mound for the Hawks, and I was behind the plate.

That's when Scott Surratt steps up.

A slow curveball was hanging over the inside part of the batter's box.

Scott Surratt was leaning his shoulder in and let the pitch hit him. So off to first, he ran.

Suddenly, the umpire yelled: “No. You can’t do that.”

I guess I thought I was a tough guy, so I yelled at Scott: “You wanna get hit? Get your BLEEP in the box, and we’ll hit your BLEEP!”

It was a significant mistake that Scott Surratt remembers to this day.

“Oh, I remember what you said, and I remember the coaches running out to get in between us,” Scott recalled.

Do you ever have those moments when you wish you could take something you said back — as if it never happened?

After the little dust-up that was oddly reminiscent of a scene right out of The Sandlot or The Natural, I recall that the next pitch was right down the middle.

And on that day it seemed like Surratt hit the ball about 450 feet over the center-field wall!

“It was the hardest and longest home run I ever hit,” Surratt recalled.

I remember it well because Scott turned and stared at me behind the plate while saying something to me that I won’t repeat. At the same time, he was slowly jogging around the bases.

Of course, I had my head down. But what could I say?

Scott Surratt is a real DUDE

I have talked about my definition of DUDES before in this column.

And Scott Surratt has always been a DUDE. That’s how he coaches and motivates his players.

Indeed, it takes a special person with God-given talent, determination, work ethic, and true grit to achieve what he has at Carthage.

The scary part is that it’s not even close to being over!

Not until I met Josh Gibson...

I never thought I would meet a coach that could compare with Scott Surratt. If I ever did, I was sure it would not be at Pleasant Grove.

I was with my family and parents at a Hawk playoff baseball game in Mount Pleasant, Texas the first time I met Coach Gibson.

I could naturally sense that something about him was different — just by our conversation.

Making small talk, I asked what he thought of the city of Texarkana and Pleasant Grove.

I remember Coach Gibson said: “We love it, and we can’t wait to get started.”

Then, I told him I thought PG could win some games with a lot of hard work, and I asked him if he thought we might make the playoffs.

It's this response from Coach Josh Gibson that I remember just like Forrest Gump because he told me without hesitation: “We’re going to win a state championship.”

Right then, at that moment, I recall that my reaction was: "No way, let’s just win more than we lose."

But Josh believed it. And that, my friends, is what it takes to be a champion.

Coach Gibson believed from deep within his heart, and that extreme confidence rubbed off on each coach and every single kid.

Now, every Friday night, the Hawks genuinely believe and expect to win no matter what team they're playing.

So if you really want to take an in-depth look inside to see what champions are made of, pick any June/July morning and stroll up to Pleasant Grove High School.

What you will see is about 150 kids working to the point of collapse with one goal: A RING!

It's gonna be big

What a treat we have in Texarkana on Friday night as the Carthage Bulldogs come to Hawk Stadium to take on Pleasant Grove.

This is a game that the whole state will be watching.

Two of the best coaches in Texas (if not the country) will be going head to head — each with kids that believe they can’t lose.

Pleasant Grove won that baseball game back in 1986.

It was the first team district championship in PG history.

And guess who hit the go-ahead home run in the 6th inning? It was ME!!!