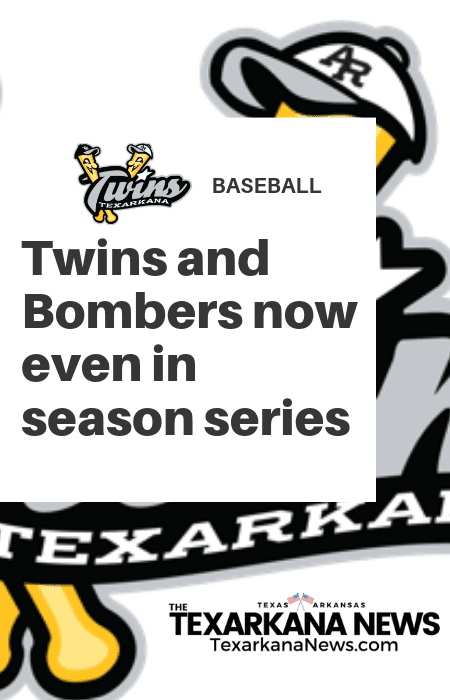 The Brazos Valley Bombers evened the season series with the Texarkana Twins at 4 games apiece with the sweep.

This is only the second time this season that the Twins have dropped both games in a series and the trouble in this one started early.

After a slow first inning and a half, the action got underway in a hurry with the Bombers putting up 4 runs on Twins Starter Matt Foster.

The Bombers collected 2 hits, a walk, and 3 Hit by Pitches in that frame and that ended up putting them in the lead for good.

The Bombers also added another run in the Bottom of the 3rd before the Twins were finally as Matt Kissamis came around on an error.

The Brazos Valley Bombers then added 3 more in the Bottom of the 5th to make the score 8-1 as we headed into the 6th Inning. The Twins responded with 2 runs of their own with Christian Boulware and Reese Durand being brought in by Ryne Randle and Tom Lichty respectfully.

However, the Bombers immediately responded with 2 more of their own which was the last of the scoring in this game.

The Twins pitching staff struggled for its first time in while giving up 10 runs and the Twins defense wasn’t at it’s best with 2 errors on the night.

Twins Starter Matt Foster was only able to go 4 Innings and gave up 5 runs in the process. Meanwhile the Twins Bullpen wasn’t it sharpest but it did have a bright spot with Michael McElmeel striking out 6 in just 2 Innings Pitched

The Twins will hit the road tomorrow to take on the Generals in Victoria for a 2 game series before finally traveling home to take on the Baton Rouge Rougarou starting on July 9th.