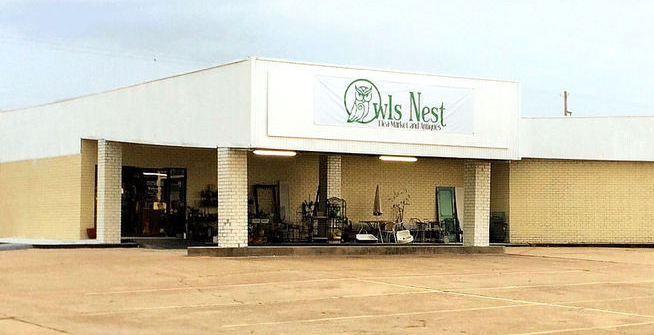 There's a new owl in town, and people looking for great prices on unique items from a large number of local vendors can now celebrate at two Owl's Nest locations in Texarkana.

The Squirrel's Nest flea market on New Boston Road recently changed it's name to "Owl's Nest on the Loop" to showcase a connection with its sister store of a similar name on Texas Boulevard: Owl's Nest on the Boulevard.

Owners Kenny and Jayna McKinnon operate both Owl's Nest locations in Texarkana. There are two other Owl's Nest stores in Topeka, Kansas operated by the couple's daughter.

Interestingly, Jayna McKinnon would not rule out another location or locations in the future. "I think it's definitely a possibility," she said.

"Many people didn't even realize the two stores were connected," said Jayna McKinnon of the two Owl's Nest locations. "So the reason we changed the name of The Squirrel's Nest was basically all about branding and marketing."

McKinnon said staff members were constantly trying to explain the connection to customers, because sales at both locations increased when cashiers sent shoppers to each other.

But that's no longer an issue due to the name change.

Now, everyone will be able to easily understand the connection between the two businesses due to the distinctive new logo.

The Owl's Nest logo for both stores now features a wise owl nesting inside a large letter 'O' with the descriptive phrase "Flea Market and Antiques" below.

The New Boston Road Owl's Nest location has also changed it's color scheme to pleasing neutral tones and made some positive changes inside as well to make shopping more efficient for customers.

The first Owl's Nest store on Texas Boulevard opened about five-and-a-half years ago, and the former Squirrels Nest (now Owl's Nest on the Loop) opened around three years ago.

According to Jayna McKinnon, the two Owl's Nest locations' success lies with the large selection of vendors and the prominent locations of the businesses.

"The Texas Boulevard location was an immediate success," McKinnon said. "It filled a gap in the Texarkana market as a nice business in a nice location. I wanted to open a store that I wanted to shop in."

McKinnon said customers want to shop at well-trafficked locations where they can feel safe and secure.

She said the Owl's Nest on the Loop is estimated to have 50,000 cars a day pass the location.

"The name change will maximize our visibility with the people passing through town," she added. "We get travelers from all over coming into shop. It's a lot of fun."

However, just about anyone will tell you that the success of the business relies first on a sound business structure that the McKinnon's have put in place, but it's the local vendors that make the Owl's Nest locations special.

Many of the items include one-of-a-kind finds including pieces of local history and inventive artistic works that help people decorate their home and office with style.

One vendor told us that there is "a lot of pride" in knowing that so many people walk in and see their booth, and many vendors create areas that showcase their own personality in both small and large booths at both Owl's Nest locations.

Local vendors are encouraged to maintain their booths to a high standard, and the friendly competition among vendors means that there are always lots of new and different items at great prices.

It's always a pleasure to browse and find a unique treasure at the Owl's Nest. Now, with the name change, customers from both Texarkana and the surrounding area will see a unified brand they can trust when they walk in to find their next treasure from the fine local vendors at both locations.

With a diverse group of artisans, collectors, antique experts and retailers showcasing their goods, you never know what you might find.

And as you leave, the wise owl from up above will be looking down at you approvingly as you go home to show off your latest treasure from the Owl's Nest to your co-workers, family and friends.