Home News School Sports Texarkana Texas Coaches from around the USA are shocked by Texas High's athletic offices due to one minute viral video that has amassed over 200,000 views

Coaches from around the USA are shocked by Texas High's athletic offices due to one minute viral video that has amassed over 200,000 views 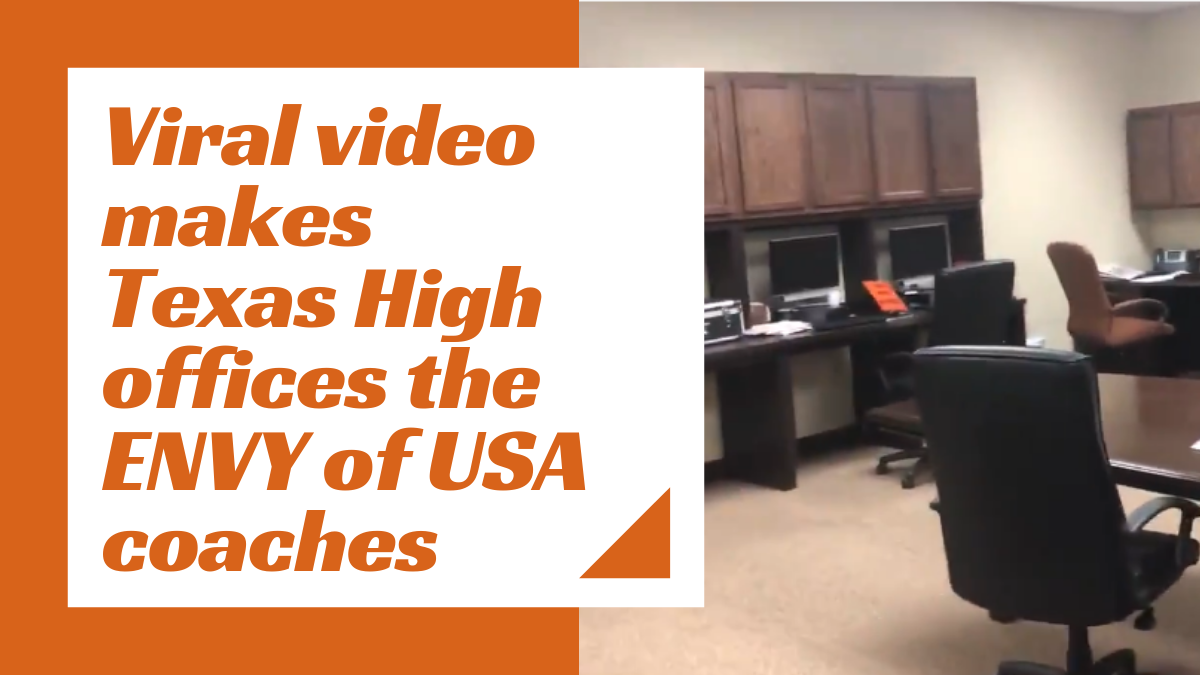 The reason for all the talk? Both high school and college US coaches around the nation who have watched the video are envious of the fine facilities. Who knew? You can watch the video at the end of this story.

The man who posted the video was named Tulsa, Oklahoma's most outstanding football coach in 2018. He is Dub Maddox of Victory Christian School, and the coach saw the facilities during a Concept Passing Clinic at Texas High when he visited Texarkana in late March 2019.

The coach had a great time during the clinic, but he also had another big takeaway from the experience: He was blown away by the top-notch facilities of Texas High School's athletic department.

Coach Maddox was so impressed he made two videos about the Texas High Athletic Department's digs. The first video showed the high school's beautiful indoor football practice facility, and it received many views. However, it was the second video of just over 1 minute showcasing the department's third floor offices that made the biggest splash.

In fact, the video Maddox posted of the third floor Texas High suite of well-appointed offices has garnered more than 200,000 views from envious coaches around the nation. Dub Maddox has a large following among head and assistant high school and college coaches nationwide as he is a frequent speaker and author.

This led many of the coaches who watched the video - even head coaches - to post photos of super-tiny offices which might be shared with up to three people. Some of the coaches lamented the fact that they had even had offices inside the boys lockeroom.

Many coaches commented that the Texas High facilities were better than college sports offices. Indeed, one entire side of the third floor Texas High offices has glass walls looking onto the indoor practice field. There's no wonder why so many coaches found it very impressive.

It's fair to say that many people in the Texarkana area are aware of the progress that has been made by TISD in building quality structures that will be able to be utilized for years to come. But when the video was shown on a tablet to people in the community, many said they had no idea the athletic department had such a nice place to support TISD's athletes, and they were proud that Texas High also has built great structures for education as well as athletics.

If you haven't seen the Texas High third floor offices, Coach Dub Maddox gives a great and enthusiastic tour. It's worth a minute of your time to watch. By the way, Coach Maddox released a new book on April 15 titled "What is Open?" about how technology is changing football. It is available from all major book retailers.