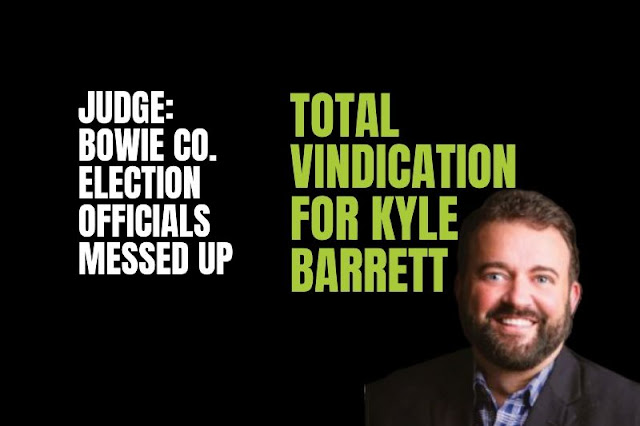 
Most media outlets wrongly decided that the biggest nugget of news in the ruling was that the judge handed the election to the incumbent because there was not overwhelming evidence of a change of 27 or 28 votes.

They were badly mistaken.


The ruling clearly indicates that the judge believes Kyle Barrett could very well have won the Republican primary election for Bowie County Precinct 3 Commissioner if it had been fairly administered on March 3, 2020.

Nevertheless, the ruling was blistering from start to finish from 307th District Judge Tim Womack of Gregg County in the bench trial.

The judge said Kyle Barrett had "shown by clear and convincing evidence [that] extensive mistakes [were] made by election officials" in the primary election.

Judge Womack said the oversights in the election (in the "findings of fact") were only "partially" cataloged in his ruling.

According to the judge, the problems were plentiful from early voting all the way through to counting the ballots.

On the issue of the statement, Womack said: "The court finds an election clerk for the Republican (election judge) at this location made a highly inappropriate statement as to why she would not vote for Kyle Barrett that was heard by two voters in the polling place, who had indicated their intention to vote for Mr. Barrett."

Furthermore, the judge said discrepancies were found in mail-in ballots, and that voter lists didn't match votes in Hooks.

He added that there were substantial reporting errors of voting in De Kalb, and an election judge had no explanation of how her signature appeared on documents at the Texarkana College polling station.

Also, he said some Republican votes were found in Democratic boxes, and he mentioned a "very disturbing" case of one more vote being cast than is listed in the signature book at Oak Grove Lighthouse Church polling place.

Finally, the judge said that procedures were not adequately followed in transferring ballot boxes and that several provisions of Texas law appeared to have been broken in the March 3 primary. And he said these were not even all the "oversights."

What we now know


So let's not mince words: A district judge just ruled the March 3, 2020, Bowie County primary election was a near-total disaster

By the way, none of our news staff personally knows Kyle Barrett outside of speaking to him or interviewing him about this election.

But we feel deeply sorry for this candidate because he was continually disparaged within the community after the election.

Many were calling him a "sore loser" who has "sour grapes."

We covered the controversy about the election. But the claims were so shocking and egregious from Kyle Barrett (and the denials so strong by public officials) that it was hard to know which side to believe.

The headline of this article reads: "Total Vindication."

There is no question in Judge Womack's ruling that virtually everything Kyle Barrett has been saying for months is true.

That means Kyle Barrett deserves a headline that is worthy of the election nightmare that he has had to endure.

Make no mistake, this ruling is a big win for Kyle Barrett.

But it is a sad loss for the citizens of Bowie County.