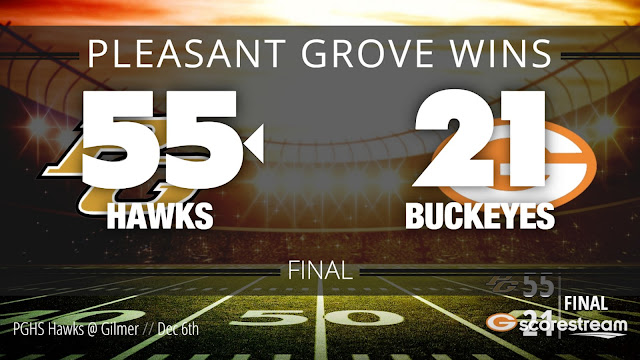 It was the happy ending that Hawk Nation football fans had been dreaming about for weeks as Pleasant Grove (13-1) put forth a dominating performance from start to finish. The Hawks swatted away the Gilmer Buckeyes (10-4) with relative ease and a final score of 55-21 at Longview's historic Lobo Stadium.

The second time was the charm for Pleasant Grove against Gilmer as the Hawks displayed growth in the playoffs by improving on its last win in mid-October over the Buckeyes (37-24). The Hawks, brilliantly led by Head Coach Josh Gibson, had the perfect balance of confidence and exuberance that helped showcase a group of young men who seem determined to claim the state championship once again in Arlington later this month.

The matchup began with zero points scored on either side at the end of the 1st quarter. However, the Hawks played hard throughout — even if there was no touchdown to show for it.

Something big seemed to happen in the minds and bodies of both teams as the 2nd quarter began.

Things heated up fast as PG standout Ben Harmon and the talented Landon Jackson teamed up for the first 7 points of the game.

But the score was soon tied 7-7 after Gilmer's MVP Darrel Bush managed 63 yards.

However, the Hawks took the lead once more as PG's always reliable KJ Hicks made his own touchdown to move the scoreboard to 14-7.

Later, Hawk favorite Sergio Rodriguez helped PG move to a score of 21-7 over the Buckeyes.

Gilmer's Brycen Jimmerson made a move to recover a Hawk fumble that allowed Darrell Bush to make a 16-yard score and change the scoreboard to 21-14.

But the scoring wasn't over for PG in the 2nd quarter as the solid Nick Martin topped it off with a 7-yard score that gave the Hawk's a lead of 14 points (28-14) going into halftime.

In the 3rd quarter, PG's Ben Harmon, the young man columnist Caven Carpenter said he would want in a major game over any Hawk football player ever, threw to his teammate Sergio Rodriquez who scored by moving 25-yards to increase the Hawks lead to 35-14.

Provo-bound, BYU commit Bruce Garrett and the reliable Nick Martin teamed up on the Hawks next touchdown as PG towered over Gilmer 42-14.

Before the end of the 3rd quarter, KJ Hicks ran 58 yards to inflate the Hawks lead 48-14 with less than 40 seconds left on the clock.

Gilmer began the 4th quarter with new energy as the Buckeye's Brandon Tennison and Marshae Spraglin teamed up to add 7 more points to the scoreboard with Hawks now leading 48-21.

With the win over Gilmer in Longview Friday night, the Hawks have claimed the 4A DII RII crown and will head to the state semifinals.

A huge "congratulations" goes out to power-scorer Sergio Rodriguez, who had an extra special night at Lobo Stadium as he made Pleasant Grove history by logging a record 14 touchdowns this season!

There's no doubt more touchdowns are to come from Rodriguez, so don't engrave "14" on his award plaque just yet as the number will likely be 16 or more.

After Friday night's stellar performance on the field, PG Coach Josh Gibson will obviously be working hard to keep the same positive energy flowing as the Hawks try to once again clench the state championship which they came so close to recapturing last season.

All signs point to the Hawks being in Arlington for the championship, so Hawk Nation fans may want to show their confidence in PG by buying their tickets immediately.

For now, however, the Full Tilt army should start planning a another trip to The Star in Frisco for the state semifinals against undefeated Midland Greenwood on December 13, 2019. Greenwood beat Iowa Park 39-33 on Friday night. Kickoff for the PG vs Greenwood semifinal is set for 6 pm.