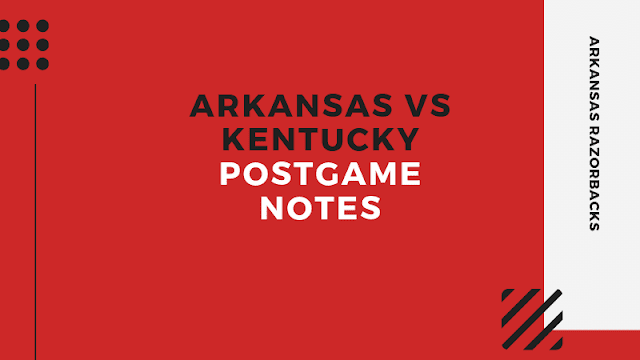 Yesterday's Razorback game highlighted a team that was hungry for a win but just came up a little bit short.

With a score of Kentucky 24 and Arkansas 20, the Razorbacks played well, and we have documented notes from the game below.

This week, the team prepares for Auburn, and hopefully Saturday's game against Kentucky will provide valuable insight into what the Hogs need to do to win.

• The Razorbacks wore cardinal helmets, white jerseys and cardinal pants. It is the first time Arkansas has won the uniform combo this season.
• Kentucky won the coin toss and deferred to the second half. Arkansas received the ball to begin the game. Kentucky defended the north end zone.
• Arkansas’ captains were seniors McTelvin Agim, De’Jon Harris, Hayden Johnson and T.J. Smith. Agim, Harris & Smith were named permanent captains by head coach Chad Morris before week one and donned a “C” on their left shoulder.
• Weather - 54 degrees, clear, winds SSE 4 mph

• The Razorbacks scored on the second play of the game on a 74-yard run from Rakeem Boyd. It was the fastest Arkansas has scored in a game this season (0:42) and the longest play of the year. It was Boyd’s third rushing touchdown this season.
• Boyd’s 74-yard run was the longest since T.J. Hammonds’ 88-yd run against Coastal Carolina in 2017.
• It was the second time this season Arkansas has scored a touchdown on its opening drive, doing so against Colorado State on Sept. 14.
• Boyd passed the 100-yard rushing threshold in the first quarter. It was his sixth 100-yard rushing game as a Razorback.
• Boyd is the 20th Razorback to accomplish the feat of six 100-yard rushing games at Arkansas.
• Arkansas recorded 176 yards of total offense in the first half, with 135 coming on the ground. The team finished the game with 305 yards of total offense.
• Ben Hicks entered the game with 1:50 remaining in the third quarter. Nick Starkel was
• Boyd tallied his second touchdown of the game on a two-yard rush with 10:35 remaining in the fourth quarter. It was his second multi-touchdown game of the year, also scoring twice against Colorado State.

• The Razorbacks forced a punt on its first defensive drive of the game, keeping their opponent scoreless for the third time this year.
• Jonathan Marshall forced a fumble, then De’Jon Harris recovered in the first quarter. It was the second consecutive game Harris has recovered a fumble and the third of his career. It was Marshall’s first forced fumble.
• It was the sixth fumble recovery by the Razorbacks this season. Arkansas has recorded a fumble recovery in four games this year.
• The Razorbacks held the Wildcats to a field goal on Kentucky’s opening drive of the second half. Arkansas has not allowed a TD in six second-half opening drives and only allowed points twice (Colorado State).
• Joe Foucha, De’Jon Harris and Bumper Pool all recorded double-digit tackle performances against the Wildcats. It was the first time since last year’s game against LSU that Arkansas has had three players with double-digit stops.
• Both Foucha’s (11) and Pool’s (10) tackle totals were career-highs.

• Connor Limpert connected on a 28-yard field goal with 14:57 remaining in the second quarter, improving his season total to 9-of-11.
• Limpert followed it with a 44-yarder with 5:48 left in the same frame, for his 10th made FG of the year. It also tied him for 7th in field goals made at Arkansas with 37.
• It was his fifth made FG from 40+ yards this season, all coming over the last four games.
• He needs one more field goal attempt to reach ninth in career attempts by a Razorback with 46.
• Sam Loy recorded a 50-yard punt on Saturday, his second of 50+ yards this season.
• Treylon Burks returned a punt early in the fourth quarter for 26 yards, putting the Razorbacks on the Kentucky 29-yard line with 11:27 left in the fourth quarter, setting up an eventual touchdown.

RB Rakeem Boyd
• Had 134 yards rushing on 15 carries with two touchdowns. It’s his second game this year with two or more touchdowns (vs. Colorado St. - 9/14), tying a career high.
• Notched the most rushing yards in a game by a Razorback since Devwah Whaley had 165 yards on the ground against Colorado State (9/8/18).
• Scored on a 74-yard TD run on the first play from scrimmage in the first quarter, his longest run from scrimmage in his career and longest by a Razorback this year.
• It was the longest rush by a Razorback since Devwah Whaley had a 75-yard rush against Alcorn State on Oct. 1, 2016.
• Had 106 yards rushing on six carries in the first quarter, his most in a quarter since he rushed for 104 against Ole Miss last year (10/13).
• It was the most yards rushing in the first quarter by a Razorback since Rawleigh Williams III rushed for 117 yards against Missouri (11/25/16).
• Now has six 100-yard rushing games in his career, making him the 20th Razorback all-time with six or more.
• Is one of only two SEC running backs with three or more 100-yard rushing games this year.
• Has 617 yards rushing this season and needs 117 more to match his career high of 734 set last year.
QB Nick Starkel
• Went 7-for-19 in the game for 41 yards. All seven of his completions came in the first half.
QB Ben Hicks
• Came into the game late in the third quarter in replace of Nick Starkel.
• Finished 5-for-8 through the air for a team-best 81 yards.
LB De’Jon Harris
• Recovered his second fumble of the season in the first quarter and it’s his second-straight game with a FR.
• Finished the game with 10 tackles, including six solo stops. It’s his second double-digit tackle game this year (Colorado St. - 9/14) and 17th of his career.
• Fourth-straight game with six or more tackles.
K Connor Limpert
• Was 2-for-2 on field goals in the game (28, 44 yards), both of his field goals coming in the second quarter.
• Now has 37 field goals in his career, which ties him for seventh all-time in Arkansas history with Alex Tejada (2007-10).
DE McTelvin Agim
• Picked up his first full sack of the game early in the second half, giving him 1.5 sacks on the night. It’s his second multi-sack game of the year (2.0 vs. Portland St.), third of his career.
• Now has 14.0 sacks in his career, which still holds him as the active career leader on the team and 2.5 sacks away from the Arkansas all-time top 10 list.
• Finished the game with five total tackles, three solo stops. It’s his second game with five or more tackles this year (6 vs. Portland St. - 8/31).
LB Bumper Pool
• Tied a career-high 10 tackles in the game, including five solo stops and 1.5 tackles for loss. The tackles for loss were also career high.
• Also had a pass breakup early in the third quarter, his third PBU of the season.
FS Joe Foucha
• Finished with a career-high 11 tackles. His previous high of seven came against Ole Miss this year (9/17).
• It’s his first career double-digit tackle game and he’s one of four Razorbacks to record a 10+ tackle game this season.
• Led the team in tackles for the first time in his career.
• His eight solo stops marked his second game this year with six or more unassisted tackles (6 at Ole Miss, 9/17).
WR Mike Woods
• Caught three passes for 18 yards, his longest of 15 coming in the first quarter.
• It was his sixth-straight game with a reception.
TE Cheyenne O’Grady
• Led the team with four catches for 44 yards. It’s his second-straight game to lead the team in catches and yards.
• It’s his third-straight game with four catches or more.
SS Kamren Curl
• Totaled five tackles in the game, three solo stops. It was his third game with five or more tackles this year.
• Now has 44 tackles this season, which keeps him tied for the team lead with De’Jon Harris.
DT TJ Smith
• Totaled two tackles in the game, but also had 0.5 tackles for loss.
• It’s his third game this year with at least 0.5 tackles for loss and second-straight (1.0 vs. Texas A&M - 9/28)