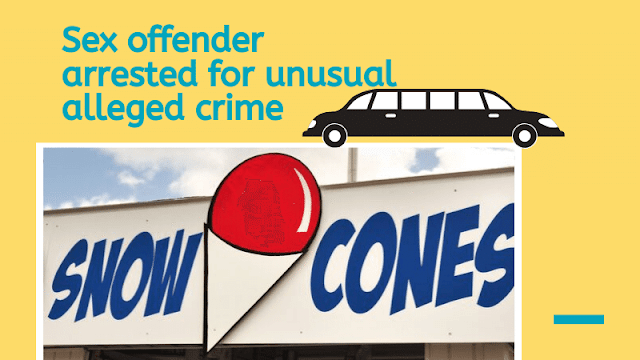 A convicted sex offender from Atlanta, Texas has been arrested by police for allegedly handing out business cards for his limousine service at a Caddo Parish sno-cone stand.

Sheriff Steve Prator of Caddo Parish alleged that Barry Carroll Hartsell was "operating a limo service that catered to children."

Hartsell, age 60, was identified by the Sheriff's Department for allegedly handing out business cards for limo services involving children at a local sno-cone business.

According to the Sheriff's Office, Hartsell was offering a special kids' birthday promotion in which he would take students to and from their local school for only $25 on the special day.

Police also allege that Hartsell advertised his limousine services by handing out business cards at an area high school as well.

Louisiana law dictates that convicted sex offenders are not permitted to work for or own a limo service. It is unknown whether Hartsell knew this provision of state law.

Hartsell is a registered sex offender in Texas, but police allege that Hartsell did not register his employment status with the Caddo Sheriff's Office.

According to the Texas Public Sex Offender website, Hartsell registered in Cass County on January 2019 and registered a "change of status" in February 2019.

The underlying offense that caused the need for registration is listed on the state of Texas website as "indecency with a child sexual contact."

Upon arrest, Hartsell was processed and subsequently booked into the Caddo Correctional Center.

His alleged crime in Louisiana is for failure to register and notify as a sex offender plus the employment prohibition for "certain sex offenders."