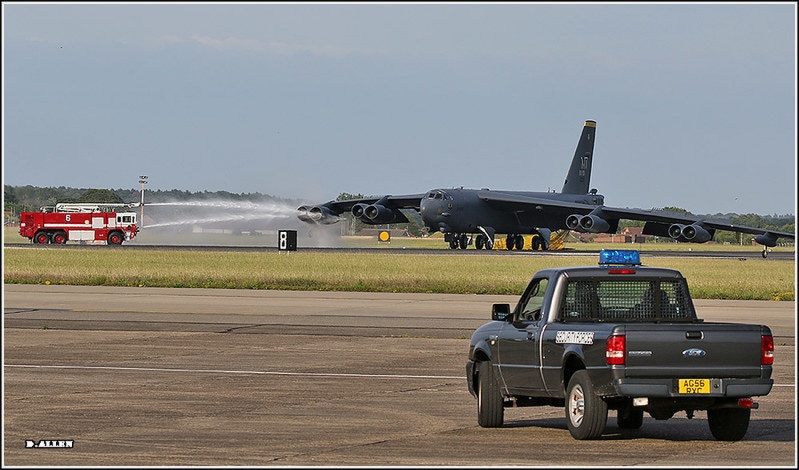 A flight chief and production superintendent who worked together at Barksdale Air Force Base, Louisiana, were surprised to hear the familiar sound of the B-52 Stratorfortress which unexpectedly landed in the UK at RAF Mildenhall last month.

A B-52H Stratofortress which was from Minot Air Force Base, North Dakota,  and not Barksdale made an unexpected appearance on the RAF Mildenhall flightline June 17, 2019, after experiencing an in-flight emergency, but landed safely and no one was injured.

The aircraft had been operating in the European theater in support of several exercises in the region.

Members from throughout Team Mildenhall were put into action – maintenance, command post, air traffic control from the 100th Air Refueling Wing, a B-52 subject matter expert from the 95th Reconnaissance Squadron, and more.

The first into action was the 100th Air Refueling Wing Command Post, along with the 100th Operations Support Squadron control tower and the controllers who disseminated information across the base, from wing leadership all the way to the lowest ranking Airmen.

“We train for situations like this in the command post all the time,” Valdez said. “It’s critical we take our checklist, run through them step-by-step to ensure we take all necessary actions and make notifications to leadership.

“Once we knew the aircraft was headed our way, we had the wing commander, vice commander and operations group commander all together and briefed them about the ongoing situation,” Taube said. “Our team was instrumental in the initial call and coordinated the who, what, where, when and why of the emergency, and helped put the aircraft safely on the deck.”

With command post being the eyes and ears on the ground, the air traffic controllers of the 100th OSS were the eyes and ears to the sky. Their effort to help coordinate a safe flight plan for the B-52 to arrive on station took proper planning, and those members attribute success in the mission to the training they receive each day.

“Staff Sgt. Quinlivan was in the local control position and was communicating directly with the aircraft and ensured a clear runway was available to them,” Rodriguez said. “Senior Airman Simpson took care of ground control and passed vital information to the appropriate facilities and coordinated with emergency response vehicles to be on scene.

“Since an emergency situation can be extremely stressful for an aircrew, it’s important for us to remain calm and collected in all communications with the aircraft,” Quinlivan expressed. “Our job was to coordinate efforts between both controllers and other facilities to make sure everyone involved was on the same page to get the mission done.”

Once the aircraft came to a complete stop, firefighters from the 100th Civil Engineer Squadron put out the engine fire, while another four firefighters assisted the aircrew with egress and then manually extinguished the engine area. Crews then cordoned off the area so a safety investigation could begin.

“We were immediately on the move after getting the call from air traffic control and the emergency communications center,” said Tech. Sgt. Bryan Tafoya, 100th CES assistant chief of operations. “The training we undergo each and every day, especially extinguishing fires on our training apparatus here, allows for us to respond as quickly as we did for this real world situation.”

After firefighters were able to complete their part of the mission, maintainers from across Team Mildenhall came together to make sure the aircraft was handled properly and removed from the runway in an efficient manner.

“I was enjoying time at home when I recognized a familiar engine sound in the sky, and I knew immediately it was different from all the other aircraft on RAF Mildenhall,” said Master Sgt. Andres Anello, 100th Aircraft Maintenance Squadron sortie support flight chief. “It wasn’t too long after I received a phone call to quickly make my way to base and respond to a B-52H landing.”

Anello and Master Sgt. Lucas Hartsuff, 95th RS lead production superintendent, who were already familiar with one another after working together on B-52 aircraft at Barksdale Air Force Base, Louisiana, were tasked in leading the team of maintenance professionals who were to remove the aircraft in a safe and timely manner.

Hartsuff was the first senior noncommissioned officer on the scene and began contacting leadership to notify them of equipment needed to move the plane and assemble a team who could successfully tow the aircraft off the runway.

“There was never any hesitation, even though the majority of the team never had experience working on a B-52. Stepping into this situation required trust in leadership and knowing the job needed to be done.

“It takes quite a bit of motivation and manpower for a tow bar to work properly,” Hartsuff explained. “Our team completed the mission by stepping up and everybody was willing to help in any way they could.

“This whole scenario showed how Team Mildenhall can come together at a moment’s notice,” Anello said. “Whether it be maintainers, firefighters, command post or any unit across this base, we take every mission seriously and allow for it to always remain the main focus each and every day.”

Photo above: Firefighters from the 100th Civil Engineer Squadron extinguish an engine fire aboard a B-52H Stratofortress from Minot Air Force Base, North Dakota, at RAF Mildenhall, England, June 17, 2019. The B-52 was taking part in an exercise over Europe when it experienced an in-flight emergency declared as a result of an engine fire warning.

Story and photo by Brandon Esau.