The homeless community has a new advocate in the Ark-La-Tex who is working to ensure that people without homes have a better quality of life.

Jasmine Wilson of Texarkana, Texas recently started a new program in Texas and Arkansas to help homeless people in the Four States area and to honor of her late uncle Chester, who was more widely known as "Chaz."

Uncle Chaz was homeless and lived in Portland, Oregon. He was one of the estimated 554,000 homeless people living in the United States.

Wilson was devastated after learning that her aunt Tamika Newborn had received a knock on her door in Little Rock informing the family of some very sad news: Chaz had died.

He was the victim of a big-city, gun violence incident in Portland and passed on June 20, 2016.

The family was not immediately notified after his death, because it was difficult for the authorities to find information on next of kin or extended family.

"In 2016, we lost him to gun violence in Portland, Oregon," Wilson said. "He was homeless, and the homeless community is very large there. But they do a lot for the homeless in Portland."

That sad news lit a spark that would launch a small idea into a very real venture — The Chaz Project.

You see, the news about her uncle's death was constantly on Wilson's mind. And she wanted to do something. But what, she asked?

So when Jasmine Wilson heard that plastic grocery bags most of us throw away could be used to make sleeping mats, she knew inside her heart that this was her calling to help the homeless while honoring her uncle's memory.

"I really wanted to come up with a way to honor my uncle's name," Wilson said. "I came across these portable sleeping surfaces which are easy to clean, easy to make and don't hold lice or bed bugs."

The process involves taking plastic grocery bags most people throw away and making them into a strong, durable plastic yarn also called "plarn." Then, the plastic yarn is weaved to produce portable sleeping surfaces.

This endeavor has gotten off to a fast start, because Wilson only decided to begin the project very recently. "I knew the anniversary was coming up of his death on June 20th," she said.

So Wilson asked her 10-year-old daughter to help, and the pair began making the sleeping mats. Since each mat is made of between 500 to 700 plastic grocery bags, it was not easy work.

But Wilson and her daughter were thrilled to be doing something good for the community.

Wilson said she told her daughter: "We may not get many mats done, but we are going to get as many done as we can."

The industrious Wilson then decided to write a Facebook post asking for people's unused plastic bags, and she also decided to post a video about how to make the plastic yarn or "plarn" from unwanted plastic grocery bags.

The response overwhelmed her.

"I was just thinking maybe I could get more bags," Wilson said. "But when I shared it online, people from all over reached out to help."

She said some people have already started making the plastic yarn and learning how to make the actual mats.

"I've received so many bags," Wilson added. "Lots of help as been offered. I had one lady go to Wal-Mart and a manager allowed her to get two trash bags full of of pre-used bags from a plastic bag recycling container."

The most significant help came from Best Buy in Texarkana which offered to set up a box for people to deposit unused plastic bags.

Tera Holder, a graduate of Fouke High School who works in customer service at Best Buy, facilitated an arrangement with management and even offered to set up the box that started on Saturday, June 22, 2019.

According to Wilson "Tera Holder saw the post I wrote on Texarkana Cheers and Jeers on Facebook and asked if Best Buy could help with this. Tera said they would love to be a central location for people to drop off plastic bags, and she would even take care of the box. I was shocked Tera and Best Buy were so helpful."

Wilson asks everyone to bring their bags to Best Buy. "We need bags, and as we get more supplies we may be able to ship them all over."

Currently, all the mats produced will be donated to "Dream Center," a Little Rock non-profit that helps feed the homeless along with other services.

In addition, she wants to find someone to distribute the finished mats in Texarkana. Of course, she also wants to send some mats to homeless individuals in Portland, Oregon to honor her late uncle.

Because of Chaz, Jasmine Wilson is teaching her daughter not to look down on individuals in the homeless community.

"Anyone could fall on hard times and could lose all control," she said. "We all would want to find someone to help."

Other family members of Wilson are also doing their part to help the homeless community: In Little Rock, Wilson's aunt Tamika, a graduate of Reynolds High School, volunteers in feeding the homeless citizens of Central Arkansas.

"Everybody needs help sometimes," Wilson said. "Its' our duty to help if we are in a position to do so."

Chaz also had two sons who took the news of their father's death very hard. One son, Chaz, Jr., reached out to Wilson.

According to Wilson, he told her: "I am truly blown away by this, and words can't explain what this means to me. All I can say is thank you."

"Thank you" is certainly an appropriate thing to say to Jasmine Wilson and her wonderful family who have found a way to honor their deceased relative with "The Chaz Project."

While Wilson appreciates all of the thanks she is getting online, she is a driven and hard working person who hopes to encourage the Ark-La-Tex to help by donating their plastic bags.

In fact, what she is really hoping for, is that "The Chaz Project" can become a larger endeavor and that more people learn how to make and distribute the finished sleeping mats to homeless citizens.

That would be the best "thanks" of all.

Editor's note: Plastic bags can be donated to "The Chaz Project" at Best Buy in Texarkana, Texas. More information about helping Jasmine Wilson with this project to assist the homeless can be found on her Facebook page. 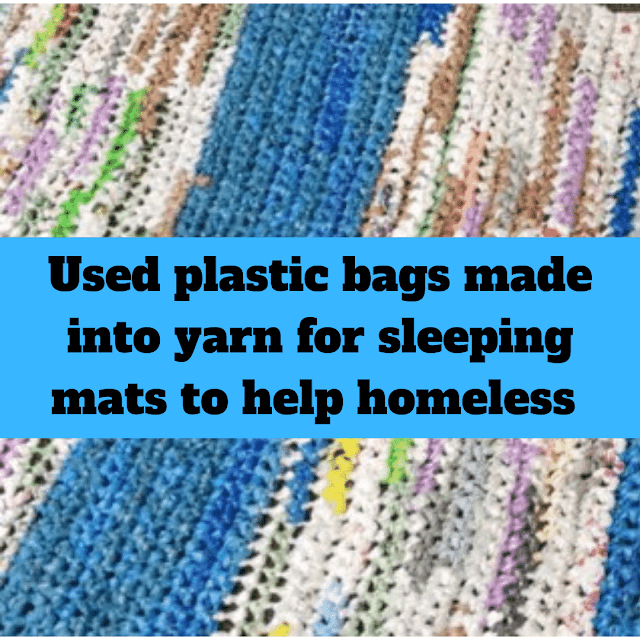