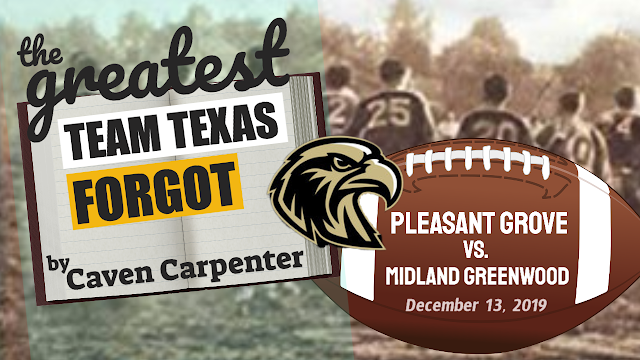 The Pleasant Grove Hawks are still on the rise as the team faces the Greenwood Rangers of Midland, Texas tonight at The Star in Frisco.


Columnist Caven Carpenter tells us what to expect tonight and recalls one of the most unlikely groups of Texas high school football heroes:


Well, it's now Game 15, and here come the Hawks! For the third year in a row, Pleasant Grove is in the state semi-finals.

And this evening, the Hawks will be back at their home away from home, which Texarkanians call Pleasant Grove West: The Star in Frisco.


The 'home away from home' analogy fits perfectly. I can compare it to the way my son, Zach, is feeling right now as he has returned home from his college apartment. While he loves to be at home in Texarkana, he's very comfortable in College Station.


Zach sleeps well, eats great, and studies at his home away from home in Aggieland. The same could be said for the Hawks when they play at The Star in Frisco.  No, it’s not Hawk Stadium, but the team sure is comfortable there.


The Hawks look to run their record over a stellar 3-year run to 43-4, as they take on the Midland Greenwood Rangers at 6:00 pm.

Seven days ago, the Hawks beat district rival Gilmer for the fifth straight time by a score of 55-21 at the historic Lobo Stadium.

If you were not at the game in Longview, you missed one of the most exceptional exhibitions of team and community spirit that this Hawk fan has ever had the pleasure of witnessing.

For those that could not attend, let me set the stage for you: Lobo Stadium is a little larger than Tiger Stadium in Texarkana.

Just imagine both sides of the stadium at more than 90 to 95 percent capacity along with screaming fans, bands, cheerleaders, drill teams, and more. Yes, it was indeed something special.

If you've managed to read some of my previous columns, you already know my favorite sport is not just "football." It is Texas high school football. And it's a sport that is rich in history.

At the PG vs. Gilmer game last week, my thoughts drifted back to some of the great playoff games I've attended here in East Texas.

As I do with most subjects when my mind turns to the past, I ask myself: "Has Texas high school football always been this popular?"

The answer may lie in one of the most exciting Texas high school football stories of all time that came to prominence during a very difficult period of American history.

It involves a football team made up exclusively of young men who were orphans. But the unlikely team managed to inspire thousands of Texans (and others around the country) who would follow them on a very unpredictable sports journey.

Author Jim Dent tells the story in his remarkable book published in 2008 titled Twelve Mighty Orphans. It chronicles the ups and downs of the Masonic Orphanage football team in Fort Worth, Texas, during the 1920s, 1930s, and 1940s.

This small school and its orphan football team became legendary not only in the state of Texas but across the United States during the Great Depression.

The legend of the Masonic football team began when Temple High School Coach Harvey Nual “Rusty” Russell moved to Fort Worth in 1927 to become a teacher at the school.

Russell would later say that it was the "right thing to do” to help the kids by starting a football team.

In those early days, Texas did not have 1A through 6A — only class A and B.  And in its first year, the Orphanage would compete in class B.

No parents. No gear.

Today, we all notice and marvel at the many different uniforms that are used by our high schools in Texas. It seems like most schools also have use of an extra bus or even a large truck to haul football equipment to away games.

This was not the case for the Masonic Orphanage. It had ZERO equipment - not even a football!  Incredibly, the team would use an old soda can as a substitute for an actual football.

Before the Masonic Orphanage's first game against Mineral Wells, Coach Russell made a deal with the opposing coach: If the orphans won, they got to keep the football.

Well, you guessed it: The orphans won their first game 34-14. That season, the team posted a record of 8-2.  And that’s something to be proud of for any first-year football team in Texas.

BUT, considering this team only had twelve players with no equipment and no uniforms, it is also truly historic.

Possibly the most moving part of the Masonic Orphanage's story is what almost all of us take for granted.

Remember, these kids had no parents, no aunts, no uncles, no brothers, no sisters - not anyone to cheer them on. In fact, they had no support system except each other.

Officially, the football team was known as the Fort Worth Masonic Home Masons. However, a Fort Worth Press reporter Harry “Pop” Boone gave the young men a nickname that stuck. He called them the "Mighty Mites."

In 1932, the Mighty Mites moved up to Class A division and began playing schools with as many as 2,000 students. This was quite an accomplishment because the Masonic Home had less than 150 kids.

The team went undefeated that year and beat Woodrow Wilson High in the first round of the playoffs.  Woodrow Wilson featured a quarterback named Davey O’Brien, who would go on the win the Heisman Trophy while playing at Texas Christian University.

The Mighty Mites made it all the way to the Texas state championship game that year and faced the Corsicana, Texas football team, which hosted the big game.

The seating was supposed to be limited to 6,000 fans, but Corsicana knew that the game would be huge. So the school brought in extra bleachers to raise the capacity to 12,000 people. But that wasn't enough either, because 18,000 fans showed up. And many of them were drunk and unruly.

The crowd packed the sidelines during the state championship game, and many were as far as 10 yards onto the field itself and could be seen just steps from each teams' huddles.

NOW think about this: Just imagine football fans today sharing the field just steps from the huddle of our famous Texas High vs. Arkansas High game (or even the Pleasant Grove vs. Gilmer game).  CHAOS!

The game ended in a scoreless tie, but Corsicana won on penetrations.  They advanced inside the Mighty Mites 20-yard line 4 times to 1.  In later years, UIL changed that rule and awarded both the Mighty Mites and Corsicana the state championship.

The Masonic Orphanage never had more than twelve players, and that's probably because Coach Russell couldn't fit anyone else in the back of his weathered truck that took the team to out of town games.

The Orphans would dominate Central Texas football in the 20s, 30s, and into the 1940s. A 6,000 seat stadium was not big enough to hold all the fans that followed the team, so the city of Fort Worth built the 15,000 seat Farrington Field in 1940. It soon became known as “The House the Orphans Built.”

But World War 2 changed the outlook for the team. In fact, the war brought so much tragedy that it did not even spare the tiny Masonic football program. After the war, the Mites never regained its dominance in football. Later, Coach Russell moved to Highland Park, where he coached future Hall of Famers Doak Walker and Bobby Lane.

The home for the orphans closed its doors in 2005. Sadly, very few artifacts remain of the place that shaped the lives of so many orphans for 106 years.

BUT it is wonderful to remember and celebrate our past by remembering and cherishing the history of Texas high school football. It has been the backbone of our state for over a century.

Oh, how I would love to see the faces of those shoeless orphans if, by some miracle, they could come back and play once again as in the movie Field of Dreams. Maybe a game at The Star, or AT&T Stadium, or even Longview Lobo Stadium.  They might just think it’s heaven!

8 things to watch: Hawks vs. Rangers

It's two more games and a ring for the Hawks! But Midland Greenwood is 14-0, and no team wins 14 games if it is not exceptional! So here is what to watch:

1. Midland Greenwood runs a cross between the spread offense and the wing-T.  They will have motions and misdirections to try to confuse the defense. The quarterback, #14 Weston Wilbur, will line up under center and in the shotgun.  He has an excellent command of the Rangers' offense, but he doesn't like to run.  So the team will look similar to Sunnyvale. However, it is important to remember that the Sunnyvale QB was a great runner.

2. Watch the play-action pass.  The QB will fake the run and try to throw, much like the Hawks do.

3. Greenwood has a good running back: #4 Trey Cross. He ran for almost 180 yards last week. The Rangers also have a big receiver, #11 Brody Ray, who has put up big numbers this year.

4. Watch for early penalties on Greenwood.  Will The Star and the atmosphere be distracting?

5. I may sound like a broken record, but you need to watch the Hawks D Line.  Will Greenwood double team #40 Landon Jackson?  And is that enough?

6. If the Rangers are in 3rd and long, watch for screen passes.  The Hawk linebackers must stay home and be aware of anything.

8. If you want to see someone who loves his job, PLEASE WATCH Coach Clint Fuller on the sideline when Greenwood has a 3rd down and the Hawks make the big stop. Coach Fuller is just one of the many reasons this Hawk team is fantastic!

4 places to eat in Frisco

1. Buc-ee’s (Royce City) - Take I-30 all the way to the George Bush Turnpike. If you want it, Buc-ee's has it. And they have the cleanest bathrooms on Planet Earth.
2. Mash’D  (Frisco) – American gastropub with a great atmosphere. Several members of Hawk Nation give it 5 stars. Address: 3401 Preston Rd
3. Cane Rosso (at The Star) -  Great pizza and pasta. It was also featured on Diners, Drive-ins, and Dives.
4. Mi Cocina (at The Star) -  Delicious Mexican food with a twist.

By the way, there will be a movie version of the book by Jim Dent called 12 Mighty Orphans. Many say it will be the football version of Hoosiers. The movie will have a theatrical opening in December 2020, and the film's stars include Luke Wilson, Martin Sheen, and Robert Duvall!