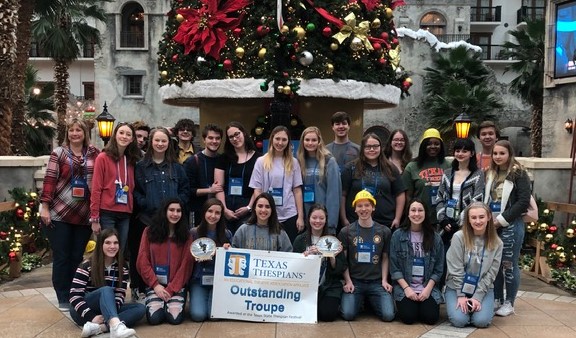 For the second consecutive year, Texas High School (THS) Thespian Troupe 2526 has been selected as an Outstanding Troupe Finalists by the Texas Thespians.


They are one of five (5) troupes, out of 500 in Texas, to receive this distinction based upon leadership, organization, and dedication to community service.  Also, they were chosen as one of the top All-Star Troupe Displays based upon their festival display presentation and activities shared.


The THS Troupe received their award during the Texas Thespian Festival held on November 21-23 in Grapevine, TX. Over 8,000 students attended, representing 325 troupes from Texas.


Six (6) student members received Superior Ratings and will now advance to the International Thespian Festival at Indiana University in Bloomington in June 2020.  They are Jeremy Creek and Miracle Shephard for Solo Musical Theatre; Zane Johnston and Darby Robertson for Duet Acting; and, Connor Powell and Cate Rounds for Duet Musical Theatre.

Lia Graham was one of nineteen students selected as a 2020-21 Texas State Thespian Officer.  She will work with fellow officers in planning, hosting, and managing the State Leadership Program, Junior Thespian Festival and Texas Thespian Festival.

THS Troupe member and current Texas Thespian State Officer, Shelby Steele, was one of the key members in planning this year’s state festival.

The Texas High School Thespian Troupe 2526 is more than just a group of student performers.  They are committed to community service having worked with the Texarkana Fire Department on skits for Fire Safety Week and assisting TISD elementary schools on Fall Festivals, Field, Days and reading programs.  The Troupe produces six (6) shows per year, hosts a dramatic theatre day camp along with a one-act play clinic and has earned state recognition during the past five years for their theatrical design program.  Members are attending state and national festivals and regional auditions while graduates of the program are earning acceptance in elite theatre programs across the country.