Pleasant Grove Hawks to face the Wimberley Texans at AT&T Stadium in Arlington on Friday, December 20 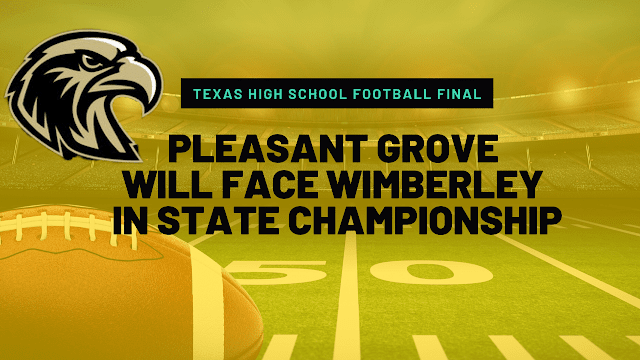 The Pleasant Grove Hawks (14-1) will face Wimberley (12-3) in the final game of the Texas state championship (4A D2) on December 20 as the semi-finals were decided in separate matchups Friday night.


The Hawks triumphed in an extraordinarily dominating fashion against Midland Greenwood with a final score of 48-20.

The Wimberley Texans beat Silsbee with a score of 56-43 in a contest that was very closely matched until the very end.


The Wimberley Texans hail from Wimberley, Texas, in Hays County. The city is about 24 miles from Austin and about 46 miles from San Antonio.

The Texans have a 12-3 record after beating Silsbee about an hour after the Hawks triumphed over Greenwood on Friday.

PG's Head Coach Josh Gibson previously won the state championship with the Hawks in 2017, and the Hawk leader has been itching for a follow-up win ever since.

For a full rundown of what happened in the PG vs. Greenwood game on December 13, click here.

Tickets can be purchased for the  Friday, December 20 game of Hawks vs. Texans by clicking here.