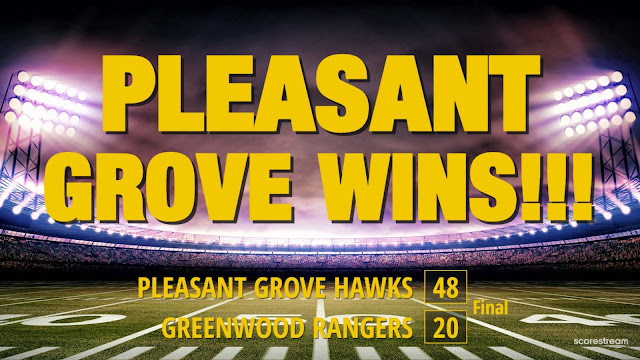 Texarkana's Pleasant Grove Hawks never fell behind in the state semi-final against Midland's Greenwood Rangers at The Star in Frisco, Texas as they cruised to a sparkling victory of 48-20.

Now, the Hawks head to the state championship game against the Wimberley Texans (12-3) for the 2019 Football Conference 4A D2 crown on Friday, December 20.


The disciplined PG team's performance seemed inspired by the popular Hawk Nation mantra #FullTilt. Indeed the team seemed to feed on the intense energy of the crowd as each player's face beamed with extreme excitement.


Coached by Josh Gibson, the Hawks began the Greenwood thumping with standout KJ Hicks making a score with a sustained drive from just one yard out. And the Hawks lead 7-0.


Then, Ben Harmon threw a brilliant 69-yard touchdown pass to Logan Johnson which took the score to 13-0.

At this point, Greenwood's Rusty Purser, who is in his first year as the high school's AD and head football coach, had to be thinking that his team needed something on the scoreboard to escape the fate of the Hawk's other playoff challengers.

Coach Purser, whose father coached Greenwood's most successful season to date in 2002, answered with a number on the board as a pass from the Weston Wilber of 46 yards to Izaiah Ramirez led to 3 points off of a 34-yard field goal for Greenwood with the Hawks leading 13-0 at the end of the first quarter.

Pleasant Grove again began its #FullTilt and "never let up" strategy at the start of the second quarter as it received assistance from a 15-yard Ranger penalty (facemask). This allowed Logan Johnson to run 26 yards for another 7 point touchdown with the Hawks leading 20-3.

But Midland Greenwood soon answered with a significant 72-yard drive leading Ryan Snodgrass to score on 4 yards, which took Greenwood a little closer to the Hawks at 20-10.

With some good defensive work, Greenwood inched even closer to Pleasant Grove with three more points and only one touchdown from a tied score with the Hawks still leading 20-13.

However, the good news was short-lived for Greenwood as top scorer Ben Harmon completed a pass (68 yards) to power player Sergio Rodriguez taking the score to a Hawk lead of 27-13 as halftime began.

Midland Greenwood's third-quarter started strong with Trey Cross scoring a touchdown on 4 yards bringing the score to 27-20 with the Hawks leading.

Ben Harmon again dominated the competition with a smart 8-yard pass to the reliable Dylan Hopkins with PG now ahead 41-20.

With a little less than 2 minutes left in the third quarter, KJ Hicks scored another 7 points for the commanding Hawks as the scoreboard now read 48-20.

And that was it for Midland Greenwood, which never managed to get ahead in the game, but the season was a success for Coach Rusty Purser at 14-1 as Greenwood's only loss was to the Hawks in the semi-final.

As many expected (and #HawkNation always believed), Pleasant Grove will be returning to the big stage. The massive win will lead to the overwhelming Christmas Cheer for Texarkana fans as The Grove heads to Arlington's AT&T stadium to finish a job that the team almost completed last year.

You can bet the #FullTilt action will be on full display as the Pleasant Grove Hawks battle hard and leave everything on the field as they attempt to bring a big trophy and some cherished rings back home to Texarkana, Texas. 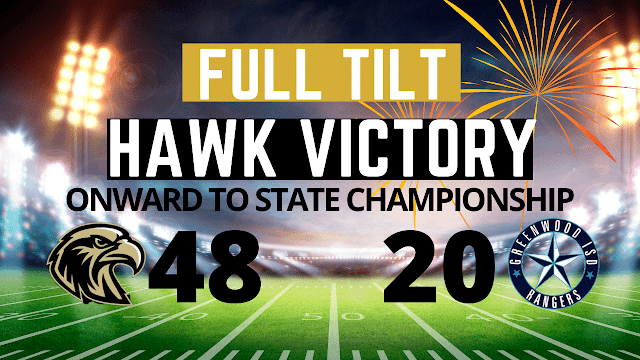