No place like "The Grove" - Pleasant Grove vs Spring Hill (Longview) 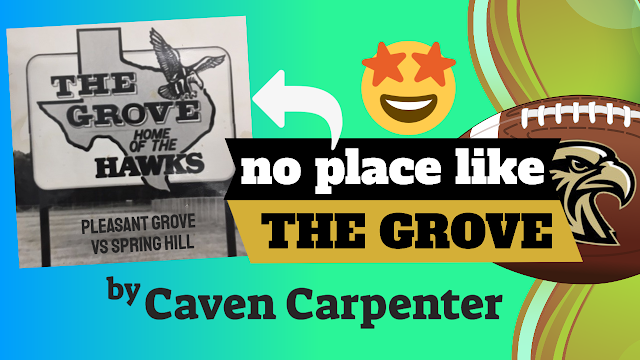 Columnist Caven Carpenter thinks back to an early PG - Spring Hill football game, discusses a famous phrase and breaks down what to look for at tonight's matchup:


The seniors on the football field for Pleasant Grove this evening are the players that began their PG football journey in seventh grade — the year Josh Gibson became Pleasant Grove's head coach and athletic director.

That means the game against the Spring Hill Panthers will be the final time senior football players, Showstoppers, Pride in Motion Band members, and cheerleaders will compete and perform together in a regular-season game.

Over time, Coach Josh Gibson helped these young men become the fighters they are today —  players who honestly believed that one day they would play for state championships. And, boy, did they ever!

So tonight being "Senior Night,"  past Pleasant Grove memories will be at the forefront of our hearts and minds.

Origin story of "The Grove"

I often get asked: "Where did the term 'The Grove' come from?"

As I mentioned last week in this column, memories fade as we grow older. And I must admit that on long days, I have started to feel my age.

But I will never forget the day I first heard someone say “The Grove.”

It all started in the inaugural year of Pleasant Grove High School.

At that time, we were playing JV football with only freshman and sophomores.

Don’t ask me the score. But I can tell you that this game was when the legendary term "The Grove" was born!

But to properly finish the origin story of "The Grove," I have to introduce you to someone special in PG football history.

The Hawks are blessed to have one of the best young defensive coordinators in Texas. That man is Coach Clint Fuller.

And Clint Fuller, who is better known as "Mad Dog," prepares young players like no other coach.

As we say around here, he goes “FULL TILT.”

But what some people don't know is that in 1983, Pleasant Grove had another famous "Mad Dog," And his name was Tommy Still.

Back to the Ashdown game

Now that I've introduced Coach Still, let's continue with the story of PG's big JV win over Ashdown — circa 1983.

After the game, several football players and I loaded onto the bus ready to depart Ashdown so we could return to Texarkana.

Literally out of nowhere, Coach Tommy Still startled everyone by jumping on the bus.

With a booming voice that no one could ever forget, he yelled: “THERE AIN’T NO PLACE LIKE THE GROVE!”

At that moment, the legend of “The Grove” was born.

And if my memory is correct, the famous sign saying “The Grove” was erected pretty soon after that.

Everyone living in and around Pleasant Grove at that time will remember the sign located on the corner of Cooks Lane and Leon Blake Stadium for all the world to see.

But these days, “The Grove” has made a comeback in the community after it had been under-utilized for more than 20 years. And I love it!

Except for 1989 (when the Hawks won their first district championship), the Pleasant Grove football program did not have its best years from 1983 to 1995.

In the spring of 1995, I was a young man who was proud to be on the PG coaching staff.

But this was the fateful year that leaders decided the Hawks would go rogue by changing uniforms and colors.

Yes, that's right, we switched our football uniforms to black and white  — with no gold whatsoever.

PG played the first game of the '95 season with the new uniforms and colors in Longview, Texas, against a talented Spring Hill team.

The bewildered looks on the faces of fans, parents, and administrators are still etched in my brain today. Trust me, the black and white did not go over well.

But something unusual happened that night, and the black and white uniforms marked a turning point in Hawk Football.

PG ended up defeating the Panthers 27-7 due to great work from players like running backs Kendrick Rochelle (KEKE) and Nick Hofert along with quarterback Lamar Amos.

The highlight of that year was the win against the number-one ranked Atlanta Rabbits, and the Hawks triumphed over them 14-7 in an away game.

As the season ended, PG finished in basically a four-way tie to go to the playoffs.

Sadly, we lost out on point differentials. So that meant we didn’t make the playoffs that year. (Back then, only two teams qualified for the honor.)

However, Pleasant Grove made tremendous strides during the year that allowed the football program to thrive from that moment forward.

Please, no more injuries this year

In all my years of playing, coaching, and watching Hawk football, I can’t remember so many injuries!

He was our running back, and in a flash, his football career was over.

I will never forget the pain he felt. And it was not because of the knee. The real hurt was that he wouldn't be able to go to battle with his teammates and close friends.

Of course, it is so sad for me to relive these memories as I see this happen again in 2019 with Jackson Cobb, Josh Porchia, and last week, Connor Stanfill.

Thankfully, the Hawks are looking to win Friday so they can go in strong and get ready for the second season: The Playoffs.

1. Spring Hill will bring a quarterback that is very similar to the Carthage QB. And we remember how good he was.

2. The Panthers will have outstanding receivers and a strong offensive line.  No, this isn’t your daddy’s Spring Hill.

3. Spring Hill has improved from year to year. Now, Coach Jonny Louvier has the team playing for a prime playoff spot.

What to watch tonight:

1. This may seem very obvious, but the Hawks MUST GET PRESSURE ON THE QB!  We all know the Hawks' defensive line is good. So I can see multiple QB sacks and pressures.

2. Look for #5 Drew LeGrand and #25 KJ Hicks to have a big night at the safety positions.

3. There is a chance that BYU-commit Bruce Garrett will sit this game out to nurse an injury, so watch for #7 Hayden Koller to chew up yards.

4. Last week, #26 Logan Johnson had his best game with around 150 yards rushing. I look for him to go over the 150 mark again tonight.

5. Keep an eye on the offensive line.  Since leader Connor Stanfill is out, Jamie Lewis and Cameron Weekly should fill in and play big.

6. Did you see what I did last week?  Number 50 Torey Phillips played a little O Line and blocked the entire left side of the LE line at once. Can he do it again? Maybe.

ALSO: Get to the game early to honor our seniors. Plus, see PG alum and St. Louis Cardinal pitcher Michael Wacha have his #38 Hawk baseball jersey retired. Congrats Michael!

➼Sergio Rodriquez touchdowns: 2
➼Sergio Rodriquez interceptions: 1
➼Anthony Mejia kick attempts: 8.5
➼Landon Watlington pancake blocks: 4.5
➼Quarterback sacks by PG: 4
➼Number of times someone will ask Michael Wacha if he is going to sign with the Rangers: 23.5
➼Number of layers of clothes my mother will be weatring: 7

Oh, by the way

If any past teammate of mine is reading this, I know you can still hear Coach Tommy Still's voice ringing in your ears with the phrase he said at every practice: “IT’S GREAT TO BE ALIVE AND PLAYING FOOTBALL IN 'THE GROVE.'" WELL, MY BROTHERS, IT STILL IS!