The biggest dudes on the field - PG vs Chapel Hill (Tyler): GAME PREVIEW 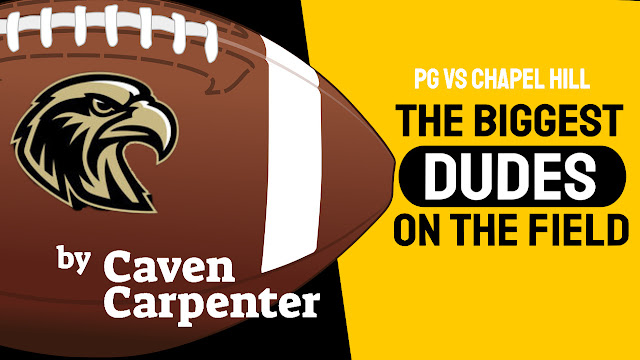 Caven Carpenter shares some family history that helps form the basis of his strong attachment to his beloved PG Hawks and tells us why the team's tight bond is unbreakable:

The greatest thing about football is the battle.  It’s team against team, and it’s man against man.

That love began as a kid when I learned about my grandfather, Sgt. Otis Gildon.  I will make a very long story very short.

Sgt. Gildon was a medic in the Philippines at the start of WWII, and he was eventually captured and imprisoned by the Japanese.

He endured and survived what later became known as the Bataan Death March, and I encourage everyone to learn more about it.

So the question has always intrigued me, what causes a man or woman to go through so much pain and danger and never give up?

Many times in my readings about men in combat, the question comes up.

Former soldiers always seem to answer the same way every time: “I did it for my buddies, I didn’t want to let them down.”

On more than one occasion, I have heard this question asked to a combat veteran, “Is there anything in life that compares to actual combat?”

Their answer is always “NO." But maybe the one thing that comes close is FOOTBALL.”

Now, I am by no means comparing combat to football, or offensive line play to war.

What I am comparing is the brotherhood that is formed from the battle fought on Friday nights.

Why do they do it?

This collection of young men do their job at a high level and get little or no praise. They do it for each other, for their team, and for their school.

THEY DO IT FOR THEIR BUDDIES, THEIR TEAM, THEIR COMMUNITY!

And no unit may do it better than the offensive line for the Pleasant Grove Hawks.

The Hawks arguably have the best O-Line in 4A this year.

➼ Connor Stanfill probably gets the most press. He has several college offers (as well he should).

➼ Jamie Lewis dominates on both sides of the ball;

Two "dudes" I want to talk about

If you’re around football coaches much, you hear the term: “That guy’s a DUDE."

One thing is clear... The PG Hawks have plenty of DUDES.

The term DUDE could mean a lot of things, but it fits #51 Chris Druhan, and #76 Jordan Stuart to a T.

And these DUDES couldn’t be more opposite. 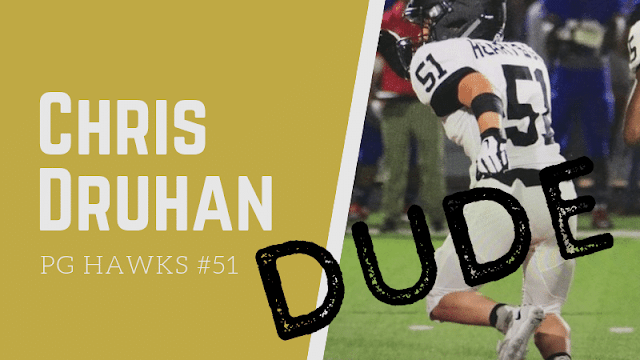 Number fifty-one Chris Druhan is a whopping 160 pounds soaking wet, but week after week for the past two years he has been a rock on this unit.

He uses his speed and strength to pancake opponents that might outweigh him by 100 pounds or more.

I asked Chris how he does it. He said: “I just have full confidence in my ability that I can beat the other guy.”

His dad passed away when he was in seventh grade. Chris said: “I play every play for my dad because he never got to see me play in high school, but I know he’s watching.”

Coach Josh Gibson praises Chris for his work ethic and love of the game, saying he’s a "coach's dream.” 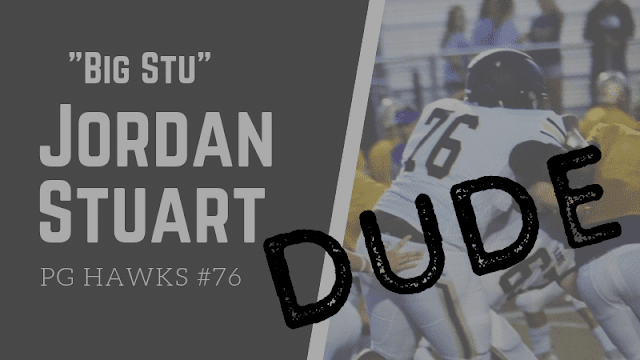 And Big Stu might be the most improved player on the Hawks from last year.

“Stewy is one of the happiest kids I’ve ever been around," PG Coach Josh Gibson said. "He loves to play football and loves to please his coaches and teammates.”

However, it was not a smooth ride for Stewy from middle school to high school.

Nevertheless, Coach Gibson said he has been amazed at how much he has grown. The coach said Big Stu was "such a great young man and a great football player."

The improvement is so significant that Coach Gibson says Big Stu will have the chance to play at the next level and go to college on a full football scholarship.

TRUST ME, STEWY AND CHRIS ARE THE BIGGEST DUDES ON THE FIELD!

What to watch for tonight in Tyler

Last year, the Hawks blew away the Bulldogs 49-0 at Hawk Stadium.

That score was surprising to me after seeing the Bulldogs in pre-game warm-ups.

I think the Hawks just jumped on them early and the game was over by halftime.

I can’t see that happening this year.

“They have a young team with an excellent coach and staff," Coach Josh Gibson said. "They are fast and athletic, so it will be a great test for us.”

If I have one concern, it’s this: CARTHAGE!

We all know who we play next week! Have the Hawks been looking ahead?

I asked Chris Druhan if the word “Carthage” had been mentioned all week. He laughed and said, “NO, NO WAY”!

Keep an eye on the Hawks cornerbacks.

“They will throw the ball on almost every play,” Coach Gibson said.

Let’s see how tight we play their wideouts.

Over/Under on Martin QB sacks is 3.5

The Bulldog's speed on defense will be better than Gladewater and compare more to Henderson.

The PG Offensive line pass protection against the speed of the Bulldogs.

If you're really interested in something fun to watch, keep your eyes on Coach Clint “Mad Dog” Fuller on the sideline. HE’S A DUDE!