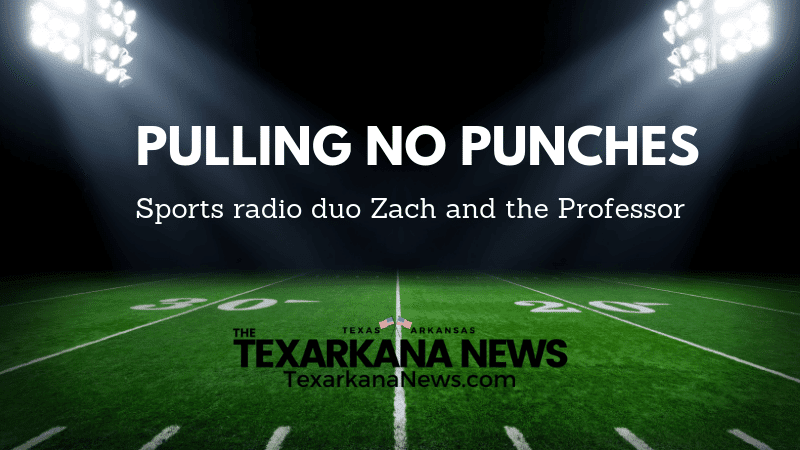 Fans of sports in the Four States have been listening to sports talk duo Zach and the Professor for more than 15 years.

After a few months off the radio, the team is back and together again on a new radio station: KTFS Radio in Texarkana on 107.1 FM and 740 AM at 5 pm.

And they're telling it like it is — including the reason they were pulled off the air at their former Texarkana radio station.

Chuck Zach and his on-air radio partner Tony Kirk are both teachers. Zach is the social studies chair at Texarkana's Texas High School and teaches US History. "The Professor" aka Tony Kirk, teaches world history at the same school.

Both say Leaving the Yard with Zach and the Professor will be a rollicking, fan-oriented show. It will begin on Monday from 5 pm to 6 pm. However, it will take an hour away from the highly-rated "Mark Levin Show," whose host has recently had the #1 book in the nation four weeks in a row.

However, Levin's show will still be broadcast from 6 pm to 8 pm every evening.

Zach says he expects a little "hate" from "about half the audience" at the beginning since people will be planning to hear "political talk."

But Zach said he hopes the station's "news/talk" fans will warm to the sports pair during the five o'clock hour.

We caught up with the brainy pair on Saturday by talking to Zach before lunch and The Professor right after he exited the theater from seeing Quentin Tarantino's "Once Upon A Time in Hollywood."

The Professor's verdict on the Tarantino movie: "Long," he said of the 161-minute film.

Zach and the Professor face a challenge

It would be fair to say that neither Chuck Zach or Tony Kirk was too pleased about being "let go a few months ago," as Tony described it, from a local radio station.

But Zach was a little more direct, saying: "The station we had been working for decided we were too old."

"They fired us," Zach bluntly said.

However, the former station was probably not expecting a local competitor to hire the team of Leaving the Yard with Zach and the Professor.

Indeed, no one was expecting KTFS to shave an hour off the "The Mark Levin Show" to accommodate the on-air team.

Both said they are not the vengeful type and are just looking forward to being back on the air.

Chuck Zach has an unmistakably unique radio voice, and his vocal skills have allowed him to have a 30-year career in broadcasting.

However, Tony aka The Professor noted that the notoriously low pay for radio talent meant that radio is definitely just a "side hustle" for the sports radio talkers.

Doing radio since the mid-1980s means that Zach knows how to use the radio equipment and "push all the buttons," according to The Professor.

He says he will just "sit and talk" while Zach handles the technical issues.

"Chuck Zach is a real radio guy," Tony said. "He might not tell you this, but he was spinning records back in the day."

The voice of Zach is both clear and Midwestern since he grew up in Wisconsin. During his life, Zach said he has also worked for politicians and even sold insurance.

But Zach loves teaching at Texas High School in Texarkana, saying "I've been teaching for 26 years and Tony has taught even longer."

He must be good at his job, because Zach, who holds a Bachelor of Science in History from Texas A&M University-Texarkana, was named Secondary Teacher of the Year for TISD in 2018. Also, he helped develop the Advanced Placement Ambassador program at Texas High School.

Since Zach has been teaching for many years, he is not worried about preparing for the upcoming school year since he said he knows what to expect. But he is looking forward to getting back to radio on Monday.

"Since I have been off the air, my wife is tired of me being home telling jokes and sports stories," Zach said.

For the record, Zach's wife, Lisa, told us: "I'm never tired of my husband being home. Period."

The Professor in Zach and the Professor describes his voice as one that everyone will recognize as a "nasally East Texan voice."

But he is very self-effacing as his voice has a natural charm, and listeners will recognize his local accent.

Indeed,  The Professor said everyone will realize who is talking as no one can mistake his accent for Chuck's "clear Midwestern voice."

But the juxtaposition of voices is probably one of the keys to the sports radio show's longevity as having two similar voices could be confusing for listeners.

Tony and his family recently left Texarkana and moved to Hot Springs Village where they opened a small business.

"My wife's family had some property up there, and it is beautiful," The Professor said.

Hot Springs Village is indeed beautiful and is noted for being one of the best retirement communities in America. But Tony and his family decided to leave and return to Texarkana.

"We got up there and decided we were a little too young, but it is a great place," Tony said.

Since the community was full of mostly older people, his daughter had fewer opportunities to socialize with friends her own age.

"We thought we were ready to retire," The Professor said. "But we weren't."

Something old... something new

While the new radio show will be a lot like the old show, there will be some significant changes due to social media.

"We're pretty much going to do what we did before," Zach said. "We're going to be talking about sports issues that interest us with lots of local sports. Plus, we will talk about national things that are going on."

Zach said guests and experts will also feature prominently in the new show like before.

"We bring coaches, journalists, athletic directors and athletes on the show," Zach added. "We'll also be doing a daily podcast for people who can't listen live."

Even though Leaving the Yard with Zach on the Professor will now be on a station that has a "news/talk" (and not sports) format, the pair does not expect to talk much politics.

"We might talk about issues that overlap in sports and news like pay equity or kneeling during the national anthem, but that's about it," Zach said.

The Professor said the show will also feature "lots of talk about the Arkansas Razorbacks."

"The Razorbacks are the most important team in this region, and if the phones aren't lighting up we can always get listener interest with Razorback talk," The Professor said.

He added: "Going into this, we are not sure who our audience will be since we have a lead-in of Rush [Limbaugh] and Sean Hannity. In general, radio is an older audience, but we will be doing some things to draw in younger people."

Indeed, the show will be breaking new ground by airing live on Facebook during the show.

"We're doing Facebook Live, and we're going to be sitting side by side when we are used to sitting across from each other in the studio talking to each other," The Professor said. "At least we are going to do that in the beginning by looking in the camera so we can remember we are being watched. That will help us reprogram our brains from just being heard and not seen."

But at the end of the day, Chuck Zach and Tony Kirk are happy to find a place to land that will feel comfortable.

They just want to be at a radio station where they can share their opinions on sports with a fan-driven radio show.

"We hope the folks that listened to us for the last 16 years will find their way to us," The Professor said.

No doubt, they will.

ABOUT THE AUTHOR: J. Jones is a graduate of the Walter J. Lemke Department of Journalism at the University of Arkansas. His articles have appeared in a few hundred newspapers in the United States, including some of the largest in America (USA Today and the Chicago Sun-Times) and smallest ones while covering state elections as a young reporter. He has been a proud Northeast Texas and Ark-La-Tex resident since his childhood.