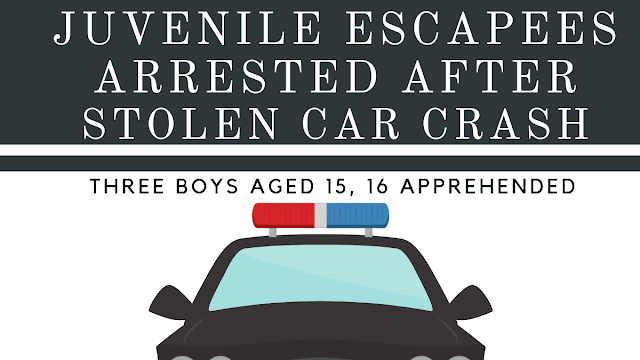 It was not a good day to be an escaped juvenile in Texarkana today — but it was a great day for police.

The Texarkana Texas Police Department arrested three juveniles early this morning after they allegedly crashed their stolen car at an apartment complex in the 5200 block of Summerhill Road.

The three boys, ages 15 and 16, had escaped from a juvenile detention facility in Mansfield, Arkansas. The vehicle had been reported stolen in Sebastian County, Arkansas.

At 2:15 this morning, officers were walking through the apartment complex when they observed a 2016 Toyota Corolla driving slowing through the parking lot with the headlights off.

As the vehicle tried to pull into a parking space, they tried to quickly leave when the officer came into view. In so doing, they struck an unoccupied truck next to them and become stuck.

After several attempts to free the Toyota from the truck by moving forward and backwards, they were successful and fled from the officers in the vehicle.

They accelerated west through the complex before jumping a nearby curb and crashing into a creek bed. The driver then fled on foot but was eventually captured after a lengthy foot pursuit.

The other two juveniles remained in the vehicle and were taken into custody without incident.

All three were transported to the juvenile detention center and charged with Unauthorized Use of a Motor Vehicle. The driver was also charged with Evading Arrest.