The coin flip heard round the world — or maybe just in Texas: Pleasant Grove vs. Community 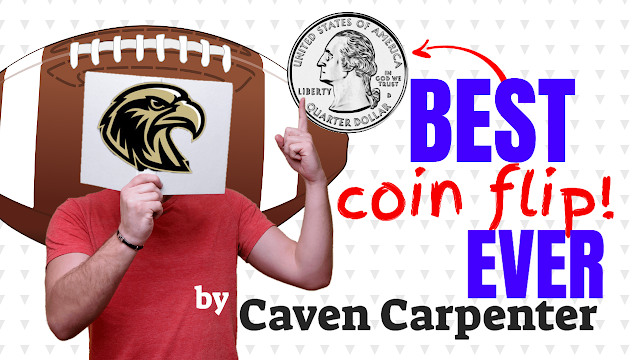 Columnist Caven Carpenter discusses what to expect and how it relates to one of the most famous games in Texas football history:

The Hawks win! Yes, the Hawks WIN!!! Because of luck — or skill, if you ask Coach Josh Gibson — Pleasant Grove won the coin flip.

Now, the team gets to play Round One of the Texas High School football playoffs AT HOME in Texarkana.

But what most people don't know is that nowadays coaches no longer flip an actual coin.  That's right: coaches now use a Texas Football directory with ZIP codes.

One person will call out the name of a school, and both coaches will say “odd” or “even” — guessing the last digit in the ZIP code of the school named. Usually, it is overseen by administrators.

Last Friday, Josh Gibson was better at guessing than Coach Jeremy Turner of the Nevada Community Braves. That means we are fortunate to be preparing for football right here at Hawk Stadium tonight.

I’m sure some people will scoff at these rules which sound rather arbitrary and complicated because they think there has to be a better way to determine game sites for the playoffs.

But that's the way it works, and the fate of a school’s entire football season could hinge on the outcome of a ZIP-code game or a coin flip. BOY, COULD IT EVER!

I know I'm not the only one reading this who is well-versed in the history of Texas high school football.

But just in case... If I said the names Gary Gaines, James “Boobie” Miles, or the word "MOJO," would you know what I am talking about?

Now, what if I said, “FRIDAY NIGHT LIGHTS?” No, not the TV series, but the real town of Odessa, Texas, and the actual Odessa Permian Panthers?

I recently read an article by Jonathan Hull entitled “The Coin Toss.”

His piece recounted the dramatic 1988 season of District 4-5A in West Texas.

In what has to be one of the most significant, non-fiction accounts of life in a football-crazed town, author Buzz Bissinger told the story in his book Friday Night Lights of the Odessa Permian Panthers.

The most interesting thing about the book is how a single coin literally shaped the future of Texas football players, coaches, and an entire community.

I cannot assume that everyone has read the book Friday Night Lights, So I will quickly help you catch up:

So it goes without saying that the desire to win was tremendous for everyone associated with Permian.

In his book, Bissinger talks about the immense psychological pressure put on Coach Gary Gaines and his players by the city, school, and parents to not only win every game — but to come home with the state championship as well.

The 1988 season would come down to the final night of the season, with Permian, Midland Lee, and Midland High battling for two playoff spots.

But what no one ever imagined was a three-way tie.

So it was left up to the district. And District 4-5A utilized the coin toss.

It was decided that the odd man out (or odd coin) would be OUT of the playoffs.

The sheriff of Midland County at the time set up the Convoy Truck Stop at a point between Midland and Odessa for the coin toss.

At 1 a.m. on Friday, November 5, 1988, coaches and some staff members met. You can be sure all of West Texas also found out about the location.

It is hard to imagine the immense pressure on these coaches — especially Odessa Permian's leader.

Permian's Coach Gaines said: “I was literally sick about the thought of having to go back to the field house and tell our kids we had lost.”

The truck stop was somewhat dark and dirty when the coaches arrived.

A throng of reporters and fans had also gathered in the small restaurant area.

Doug McCutchen, Midland's coach, brought a 1922 silver dollar given to him by a former school board member.

Midland Lee Coach Earl Miller was given a lucky coin by one of his players, and Permian Coach Gary Gains just reached in his pocket to luckily find a quarter.

All three coaches flipped at once.

Permian's coin (and the fate of the Permian Panthers) rolled under a dirty table.

Of course, all the air seemingly left the room as Coach Gaines crawled under the table (on all fours) looking for his coin.

In a loud voice, everyone at the Convoy Truck Stop heard the coach proclaim: “HEADS!”

The rest of the story

That meant Midland High was out of the playoffs.

A book, movie, and even a TV series would follow.

However, no one knows what life would be like in West Texas if the coins had landed differently.

As for me, I am glad Gary Gaines had the right quarter in his pocket on that night way back in 1988.

It's great that Coach Josh Gibson did not have to go to a dingy truck stop for a coin toss, and the Hawks still get to start the "second season" on Friday night at home.

The team should be rested and ready to take on the Nevada Community Braves.

The Braves will arrive in Texarkana with a record of 5-5 and a fourth-place finish in District 5.

The break between games could not have come at a better time for Pleasant Grove.

I have not been in the locker room or on the practice field lately, but I am sure Coach Gibson is preaching that players try to take things one game at a time because this is a new season.

And, yes, it literally is a new season.

If the Hawks win tonight, the team will play the winner of the Salado vs. Rusk game next week.

Maybe I'm an old-fashioned, superstitious kind of guy because I don’t like to look too far ahead in the future. I want to focus on the game that is happening next.

BUT, the Hawks have been favored to come out of this region by all the experts. And Hawk fans don’t have to look far to see our old foe the Gilmer Buckeyes in Round Four.

But let’s wait a few weeks to talk about them!

What to look for tonight

1. There is no gentle way to say this, but #6 Nick Martin is an absolute BEAST! If he gets between 6-10 carries at running back, he WILL score three touchdowns.  BOOK IT!
2. You will not see the best deep snapper in Texas #52 Reese Foster, because the Hawks won’t punt.  But you will see him at Center.
3. #10 Ben Harmon. SERIOUSLY!
4. Watch how hard #7 Hayden Koller runs the ball, and think about how many running backs PG has that could start at almost any other school.
5. Watch #25 KJ Hicks tackle. IT’S BIG BOY FOOTBALL.  Well, you may not want your small children to watch. That's how scary it is!
6. Look at how beautiful the Showstopper Captain is!  Trust me; they’re ALL beautiful!

From our family to theirs

Most of us in Texarkana have heard that the Nevada Community Family has dramatically suffered this past week after four teenagers were lost in a tragic auto accident a little over a week ago.

As a dad of two, it’s hard for me to even write about this, and I can’t imagine the pain that these parents, friends, classmates, and community members are feeling right now.

So let’s give Nevada Community a huge HAWK NATION welcome when they arrive tonight to let them know we love and support them.

Remember, It’s ONE STATE, ONE COUNTRY, ONE KINGDOM!  Praise GOD!