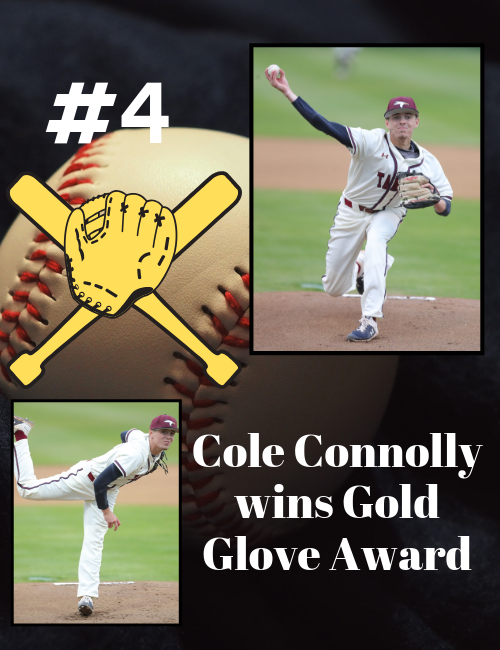 Baseball awards for college players don't get a lot bigger than this.

Cole Connolly, Texas A&M University-Texarkana pitcher, has received the Rawlings National Association of Intercollegiate Athletics (NAIA) Gold Glove Award as a result of his play during the 2019 season.

The Rawlings Gold Glove Award is given to one player at each position in both the American and National Leagues in Major League Baseball, as well as to one position player from each division of college baseball.

The national award, voted on by the American Baseball Coaches Association, recognizes Connolly as the best defensive-fielding pitcher in all of NAIA baseball. There are 187 colleges and universities with baseball teams in the NAIA.

Connolly’s statistics from the 2019 season include an ERA of 3.25 over 83 innings pitched with 47 strikeouts. His fielding percentage was a perfect 1.000% for 30 fielding chances with 12 put outs and 18 assists.

Connolly, a junior right-handed pitcher from Auburn, Wash., is the first player from A&M-Texarkana to receive the Rawlings Gold Glove Award.

“We are very excited that Cole Connolly was named to the NAIA ABCA/Rawlings Gold Glove team,” said TAMUT head coach Steve Jones. “Cole is certainly worthy of this award. He’s one of the most athletic pitchers I’ve ever coached,”

Jones added. “Not only did he have more fielding chances than anyone else in the country, he performed flawlessly. It’s a wonderful achievement for Cole and the program to be recognized nationally.”

Texas A&M University-Texarkana competed in 6 intercollegiate sports as a member of the Red River Athletic Conference during 2018-2019.