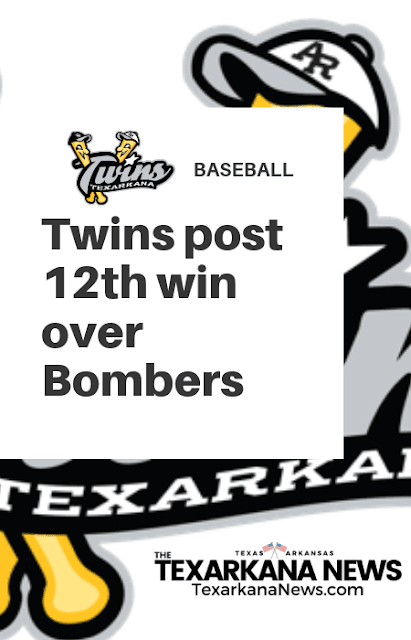 Victory was secured by the Texarkana Twins last night by a hard-working offense that helped deliver the 12th win overall win.

Tonight the Twins (12-8) offense returned, generating 11 runs on 15 hits in a crucial win over the Brazos Valley Bombers (19-5) and the best part is that it was truly a team effort. Every Twin in the lineup tonight got at least 1 hit and 8 of them also got on base at least twice throughout the game.

The first 2 Twin batters were quick outs but after a Tom Lichty single extended the inning, new come Jake Taylor came up to the plate and, in his first TCL At Bat, smoked a ball over the left field wall for a 2 Run Home Run to get the action going!

The Twins and Bombers both scored 2 runs in their respective halves of the 3rd Inning but the Twins were able to extend their lead in the 5th by scoring 2 more runs to make it a 6-2 ball game.

However, the Bombers would not go down quietly as they scored 2 runs in the 6th and 7th to tie the game a 6 heading into the bottom of the 7th. However, the Twins quickly answered back scoring 3 runs that would give them the lead for good!

The Bombers continued to fight though and were able to get 2 men on base with only 1 out in the 8th.

Head Coach Bill Clay then made the decision to bring in Lefty Reliever Joseph Standley to earn the 5 Out Save.

And he did exactly that. Quickly getting the last two outs to end the 8th and then, after the Twins added to more runs in the bottom of the 8th, came back to toss another scoreless inning to finish out the game and give the Twins their 4th victory on the season against the Bombers.

The Twins play a Double Header against the Bombers tomorrow at George Dobson Field to make up for a game that was cancelled earlier in the season.

The first game will start at 4 pm with the second game being scheduled to start 30 minutes after the end of the first game This concludes a 3 game series including a double header on Saturday, June 29th.