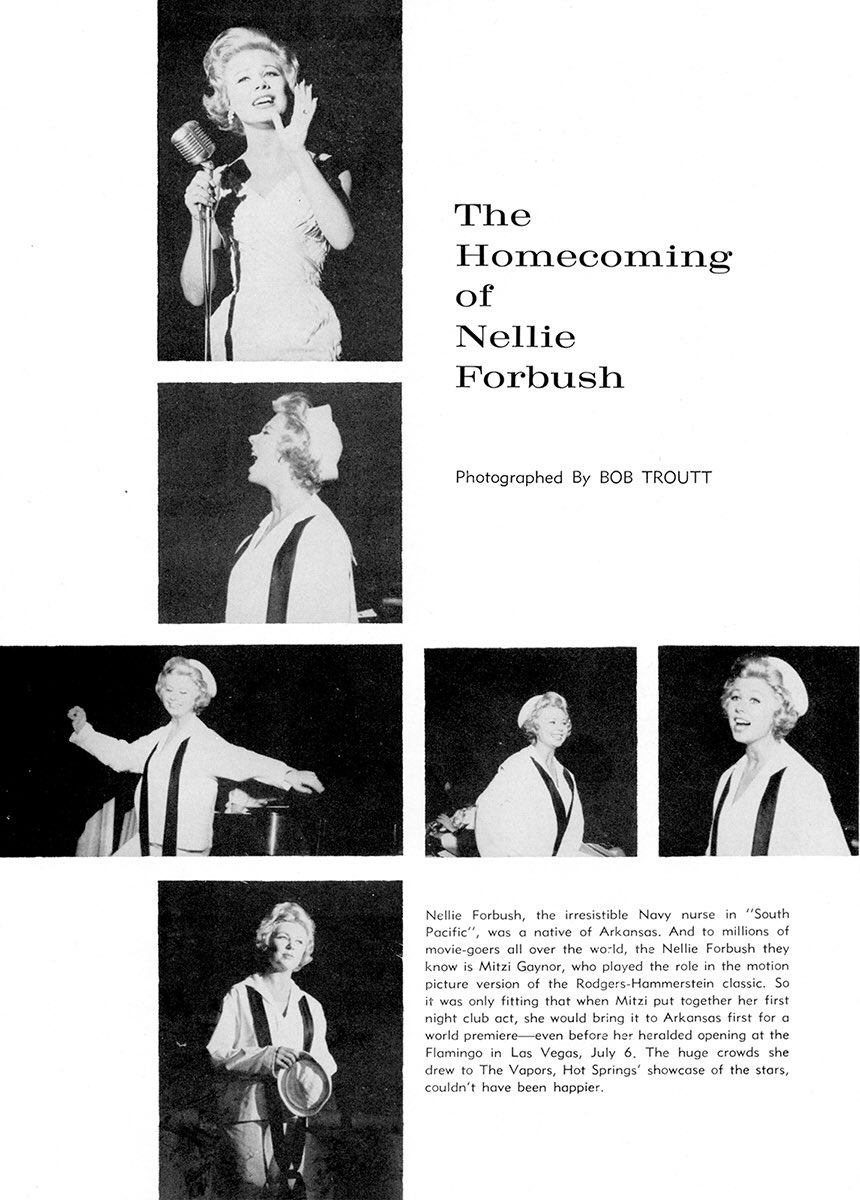 "At about this time back in 1961, I was rehearsing to break-in my concert act in Hot Springs, AR at a wonderful place called... I kid you not, The Vapors," she said. "The opening night... changed my life forever. What a thrill."

She based her stage show on the character she portrayed in Rodger-Hammerstein's "South Pacific," Nellie Forbush. The character (Forbush) was an Arkansas native, and Mitzi Gaynor wanted to come to Arkansas because of this.

The movie star said the city gave her a good place to shake off the nerves so she could make a confident Las Vegas debut at the Flamingo Hotel. "Why Hot Springs? Well, first let me say I was incredibly nervous," Gaynor said. "Though I got my start on the stage in musicals for the Los Angeles & San Francisco Civic Light Operas, and even took a show to Broadway, I had always played a part –never myself. This time, the marquee read Miss Mitzi Gaynor! Wow, that’s me... but who is me on stage? Well I guess I was going to find out, and quick."

In 2016, Gaynor told her Facebook followers that she chose Hot Springs because she wanted to "break the show in" away from the national media. "My husband Jack had heard that Owney Madden, who’d run the fabulous Cotton Club in Harlem during the 1920’s, had a nightclub in Hot Springs, Arkansas called, of all things, The Vapors," she said.

"If we broke the show in there, we’d be far enough away from reporters and critics that we’d have a real chance to work out any kinks before taking the show to Las Vegas," she said. "Did I mention I was nervous? I practically had the vapors myself. We arrived in Hot Springs, which was sweltering, and settled into our room at The Velda Rose motel across the street from the club."

Gaynor said The Vapors was home to some interesting musicians: "The Vapors had a house band, The Buddy Kirk Orchestra," Gaynor said. "I can’t say that my confidence level was raised by their slogan – Buddy Kirk & His Music That Really Perks. Well, hopefully Buddy would perk, so I could perk and vice-versa."

But Mitzi Gaynor said coming to Hot Springs was exactly what she and the show needed. "Opening night came, and my overture was playing as I stood in the wings waiting to go on," she said.

For the first time, Gaynor said she realized "these folks are here to see me." She said it was thrilling and that she could hear the crowd buzzing. "There’s nothing like this particular moment for a performer," Gaynor added.

In fact, the Hot Springs debut at The Vapors went way better than expected. "Towards the end they were standing on top of the bar shouting for more. I couldn’t believe it," she confessed.  "At that very moment, I knew I wanted to do this for the rest of my life."

After the reaction of the Hot Springs crowd, Gaynor said she actually wished for the reporters and critics she was trying to keep away from the show until it was perfected. "We’d have to wait [until] Vegas for that, but we were on our way," Gaynor said. "I’m so grateful to The Vapors, and to all the lovely people who came out to see me. They showed me so much Southern hospitality that it changed my life forever. I truly love what I do, and am so very honored to have spent time in front of wonderful audiences - well, friends really - for most of my life."

(Below) Mitzi  Gaynor tells how she met Rodgers and Hammerstein

(Below) In the video above, Mitzi Gaynor talks about her screen test for South Pacific. Here it is: