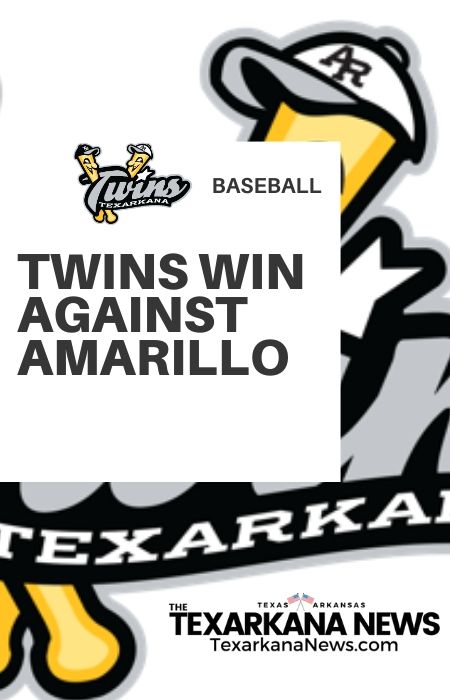 The home team, the Texarkana Twins, scored a victory Thursday versus Amarillo —  the second big win of the new season.


The Twins completed their first road series last night against the Amarillo Sod Dogs. Behind some great pitching and some even better hitting, the Twins fought back once again to defeat the Sod Dogs 6-5.


It was a pitching duel from the start for both teams tonight, as no runs were scored in the first two innings of play.

The Sod Dogs scored first in the 3rd inning, taking an early lead once again, leading 1-0 after three innings.

Texarkana quickly struck back, scoring two runs in the top of the 4th, taking a 2-1 lead.

The Texarkana Twins would then capitalize on that lead, adding two more runs to their score in the 6th.

However, the Sod Dogs didn't wait long before scoring four runs in the bottom of the 6th inning, taking the lead 5-4.

That would be the last run that the Sod Dogs would post, as the Twins had enough of getting beat.

Charlie Welch lead things off in the 8th inning with a solo home run, and Jay French wouldn't take long to score after hitting a single right after the home run.

French touching home plate counted as the sixth run for the Twins, leading to a 6-5 victory for the Twins over the Sod Dogs tonight.

Ty Hoeker started things off for the Twins tonight. Hoeker lasted 5 innings, and he posted 4 strike outs while only allowing 1 run. Flavio Tirado followed Hoeker, pitched for 1.2 innings, and was followed by Andrew Hernandez, who lasted 2.2 innings and added 1 more strikeout.

Jonathan Sylvester ended the game tonight thanks to a flyout that was caught by French. Ricardo Leonette ended his night 2-5 tonight with a pair of singles, Charlie Welch ended 1-3 with a solo home run, and he also walked twice tonight.

Jay French went 1-3 with a single, and reached base on an error. French also scored two runs for the Twins. Tyler Trovinger, Reed Spenrath, Casey Rother, and Seth Hopkins all ended with one hit as well. Spenrath had a double, and Trovinger, Hopkins, and Rother all had singles.

This is slated to be the most exciting TCL season ever, with five minor league organizations being added to the league.

Editor's Note: For tickets and information on Texarkana's very own Minor League Baseball Experience for the 2020 season, go to www.texarkanatwins.com or call (903) 294-PLAY.