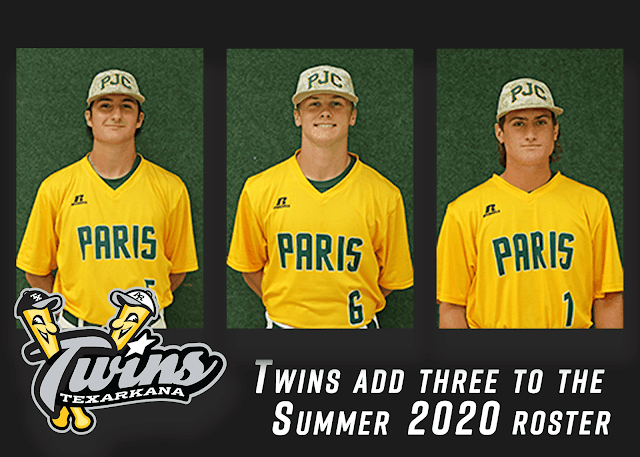 It's a good day for people who love the Texarkana Twins. That's because a trio of top talent from Paris Junior College will be coming to the Twin Cities in summer 2020.


The players will bring a new level of diversity to the Twins' roster. They include a second baseman, a relief pitcher, and a centerfielder.


The Twins 2020 season starts on Thursday, May 28, in a home game opposite the Victoria Generals. This will be fans' first chance to watch the new players in action.

All of the young men are brand new to the Texas Collegiate League, and, of course, to the Texarkana Twins.

Brian Nelson, Director of Baseball Operations for the TCL, said the league is "super excited" about continuing a positive relationship with Paris Junior College.

Nelson said Twins Coach Clay Fox knows these new players have a winning spirit, and he said he is thrilled that the Twins can continue to get the best players in the area from Paris.

⦿ Camron Dollar, a centerfielder, is a freshman in Paris from the Ark-La-Tex town of Minden, Louisiana.  He was named All-Area Defensive Player of the Year after his senior year by the Shreveport Times. In five games, Dollar recorded five put-outs for the Dragons, which contributed to their record of 9-4. Since he is from the Ark-La-Tex, he had played in Texarkana before when he was a participant in the Under Armor National Tryout in 2018, which was held at George Dobson Field. This happens to also be the home of the Twins.

⦿ Sam Creed, a second baseman out of Arlington, Texas, is in his second season at Paris Junior College. He finished his first season in the NJCAA in New Mexico (Luna Community College). Creed has an enviable .421 batting average and 12 RBIs in only 12 games with the Dragons. He has never been in the TCL before, but he did play for the Salina Shock in Salina, Kansas, last year. It is in the Sunflower Collegiate League.

⦿ Caleb DuBois is a relief pitcher who hails from Bridge City, Texas. He was awarded the Southeast Texas Coaches Player of the Year in his senior year, and the left-hander is now in his sophomore year with the Dragons. He has racked up 18 strikeouts in the 17 innings which he has pitched.

The Paris Junior College Dragons will play its first game tomorrow opposite Bossier Parish. It will be the first conference game of the season.

The fine folks of Texarkana will want to come out on May 28, 2020 to welcome the new Texarkana Twins players to George Dobson Field.