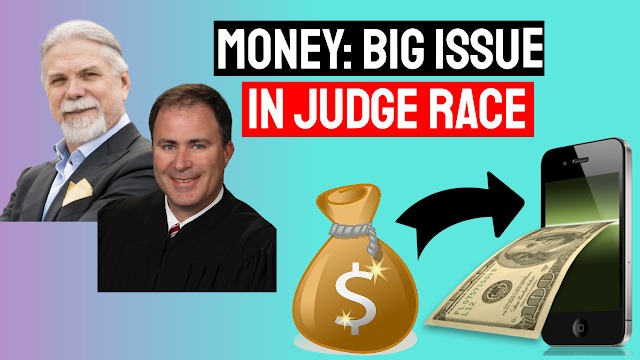 A brand new ad about money is shaking up the race for 5th District Judge between Bill Miller and Monty Murry.


In recent days, the race for the Republican nomination for judge serving Bowie and Cass counties has appeared to be tightening.


In the new ad mentioned above, one candidate has accused his self-funded opponent of trying to "buy the bench." And the other candidate says that favors are expected from any judge who accepts political contributions.


The latest ad from the Bill Miller campaign sent to voters through the mail criticized Monty Murry for using what Miller calls Murry's "personal wealth" in the battle for judge.

Judge Miller pulled no punches by saying: "Our cases are too important for someone who thinks he can buy the bench."

The mailer is likely meant to counter advertising from his opponent, Murry, who informed voters that he is not taking contributions. However, Judge Bill Miller is accepting political donations.

Murry said he believes no candidate for judicial office should accept contributions. He said this is because people who donate to judges — often lawyers and others who often have matters in front of the court — might expect favors from any judge who received their contributions.

In his political mailer, Judge Miller tells voters to stand up for victims and families. He said: "Don't give their cases to a candidate who considers personal wealth a job qualification."

Monty Murry says his decision not to accept campaign contributions is a moral choice he made because he does not want any litigant to expect favoritism if he were to be elected.

Murry also said that he wishes to dispel the myth that he is wealthy.

The local attorney said his wife retired as a school teacher from Texas High School in Texarkana after decades of service. But she decided to resume her career and has taught senior English to Ashdown, Arkansas students for the past six years.

Murry said he and his wife live in a "modest home" in Nash, Texas and that the couple is doing everything in his campaign on their own  — from pounding yard signs into the ground to using Photoshop to design Facebook ads.

What the new ad says

Miller sent out the mailer with a "VOTER ALERT" in all caps and bold lettering.

Miller also makes a case that voters should choose an experienced judge to tackle the thousands of cases the court will face in the coming years.

Monty Murry told our reporter that his career began in criminal law, and he said that he has more experience in criminal and family law than Judge Miller did when he took the bench in 2015. Click here to read the full interview.

Judge Bill Miller told us he believes the public should know more about his opponent, including the fact that he has been practicing personal injury law for many years. Miller said tort litigation makes up only a small part of court cases heard in the 5th District Court. Click here to read full interview.

Most local political watchers had widely expected Bill Miller to win re-election as judge in a landslide. In fact, most people assumed he would have no opponent at all.

While it is still possible that Miller could win by several points or more, opponent Monty Murry is showing new life, which leaves some wondering whether he could eke out a surprise win in the race.

A poll by the Texarkana News on Saturday, Feb. 22 also confirmed a deep interest in the race.

The poll asked voters to choose which candidate they preferred. A total of approximately 3,800 votes were cast in the 10 hours of our poll on Saturday from 6 am to 4 pm.

The result of the poll was a tie.

Miller received 43% of the vote, and Murry also garnered 43% of the vote. A total of 14% of voters indicated they were undecided, which seems to be a high number in a race where early voting has already begun.

Online polls are not scientific, but they can provide essential clues to the direction of political races. And the almost 4,000 votes in our news poll in less than half a day on a lazy Saturday illustrates the considerable interest in this match-up for judge. For full details of the poll, including screenshots of the results, click here.

The race for the 5th District Court has already thrown conventional wisdom into the garbage heap.

When it was announced that Monty Murry was challenging Bill Miller, there were a few assumptions that were made by many.

First, it was assumed that any challenger would be hammering Bill Miller since he is the incumbent and is sitting on the bench in the 5th District Court.

However, the opposite has been true. Judge Miller has been more eager to criticize his opponent directly, and Monty Murry said he will "not go negative."

Second, it was assumed that a personal injury attorney would have a difficult time winning support.

However, Murry is an untraditional personal injury attorney who is popular locally. Unlike others in his profession, he says he tells several potential clients each week that they don't need an attorney at all. Murry also says he informs his clients they will "not get rich"  from insurance company money.

Bill Miller works closely with local Boy Scout troops and is an excellent photographer who has worked with sports teams over the past few years. Miller also helps teach scouts information that assists them in earning merit badges for both law and photography.

Monty Murry has talked openly about his Christian faith and was a music and youth director while in law school at Baylor. He is also an Ironman Triathalon participant and a marathon runner who recently participated in the New York City Marathon about three months ago.

The race for the 5th District Judge has two candidates with significant legal experience — although only Miller has served as judge.

But the election of the 45th president in 2016 shows that voters might consider someone they already know as a serious candidate even if he or she has never held elective office. So the well-known Monty Murry seems to be getting a hard look from voters as evidenced by the high number of undecided voters in Saturday's online poll.

It must be noted that a large number of Christian conservatives vote in the Republican primary in Bowie and Cass counties, and this constitutes a significant political force in all local elections.

Christian voters will find things to like in both candidates: 1) Bill Miller is seen as a tough but fair judge with experience who helps scouts and is a leader in official Texas legal organizations. 2) Monty Murry is viewed as a longtime lawyer with ties to Mike Huckabee who has conservative Christian credentials.

Since the current president has no real opposition for the Republican presidential nomination, turnout numbers in Bowie and Cass counties might be lower than 2016 when there was a contested primary election, which included Texas Senator Ted Cruz.

This means both Miller and Murry might have a more difficult time getting their voters to the polls since there is not a hotly contested congressional race or a serious challenger to the President in the primary.

However, the race for Bowie County Sheriff could draw additional voters to the ballot box.

The good news for voters is that both choices in the race for 5th District Judge have lots more "pros" than "cons."

And it is clear why voters may be having a tough time deciding between the two candidates.

Indeed, the perceived tightening of the race probably means even more money will make its way into the campaign until the two local legal powerhouses finish their battle on Super Tuesday, March 3.