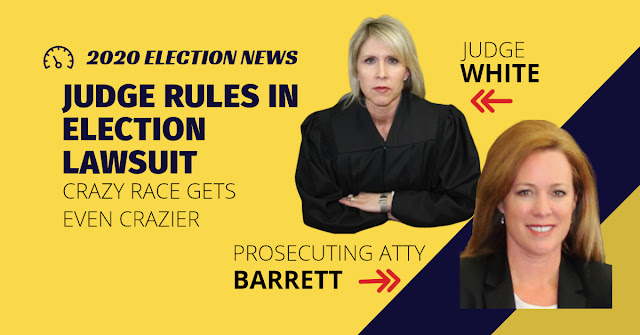 Editor's note: This is the second in a series of opinion columns on the race for Arkansas Court of Appeals District 4, Position 2 by BJ Jones. We operate under the "horserace political journalism" style to determine who's up and who's down. This article will appear in news outlets in both Texarkana and Hot Springs.


It was a mixed bag for popular Miller and Lafayette Prosecuting Attorney Stephanie Potter Barrett following a ruling in her hard-hitting election lawsuit in her battle against another well-liked Southwest Arkansas legal figure: Judge Emily White.


Instead of signaling a clear winner in the race for Arkansas Court of Appeals, a recent court decision meant that no one can predict what will happen at the ballot box on March 3, 2020 — three months from today.


The good news for Barrett: Judge Tim Fox of  Pulaski County ruled that Judge Emily White, 45, cannot use the title "Judge" on the March 3 ballot because she was appointed by Gov. Asa Hutchinson and not elected. Nevertheless, Judge Fox ruled White can use the title after the March 3, 2020 primary. However, Barrett will be able to use her title of prosecuting attorney in the March 3 non-partisan primary.

Some not so great news, too: Judge Fox disagreed with Stephanie Potter Barrett on virtually everything else in her lawsuit, which attempted to have Emily White removed from the ballot.

Barrett's lawsuit's argued that 1) White lived outside the judicial district, 2) The judge should use her legal last name of "Lengefeld" and not her professional name of "White," and 3) White's election petition was tainted because she used the title "Judge." However, Judge Fox dismissed all of those concerns.

Why it matters: It may not appear that Stephanie Potter Barrett, 46, was victorious in the lawsuit. But that's just plain wrong. Barrett's seemingly small victory was actually a massive win for the prosecuting attorney.

If White were allowed to appear as "Judge Emily White" on the non-partisan primary ballot, the race would likely be all but over for Stephanie Potter Barrett.

Here's where things get crazy: Have you ever had a district judge surveilled after midnight at her home? Me neither. But that is just what happened in this wild political race, according to an Arkansas Democrat-Gazette news report about the hearing in Judge Tim Fox's courtroom regarding the Barrett lawsuit.

The Arkansas Democrat-Gazette report said that a private investigator testified in front of Judge Fox that he surveilled Judge White's home in Grant County (outside the judicial district) in the wee hours of the morning on behalf of Prosecuting Attorney Barrett's lawyers (Josh Potter and Jacob Potter). The report said the private investigator alleged that he spent a little over 15 minutes at the judge's residence before Barrett's lawsuit was filed. White purchased a home within the judicial district in February.

It takes guts: No one can say Stephanie Potter Barrett is not a fighter, and this bodes well for her in a tight race against White. However, Emily White will be a tough opponent who has a strong base with Christian conservatives in Southwest Arkansas. As virtually everyone knows, this is a powerful constituency in any Southwest Arkansas non-partisan primary.

Stephanie Potter Barrett's aggressive campaign style is more akin to that of a candidate running for Attorney General than an appeals court judge, but this does set her apart from Emily White. Indeed, Barrett's campaign will likely stress her skills as a no-nonsense prosecuting attorney. And this message could help her win.

What I discovered: Beginning in mid-November, I spoke with 20 lawyers in Southwest Arkansas regarding the appeals court race to get a sense of the political landscape.

The overwhelming majority of the 13 male and 7 female lawyers I spoke with believed Stephanie Potter Barrett was right to file the lawsuit to get the "Judge" label removed from Emily Barrett's name on the ballot.

Political misfire? All but two of the Southwest Arkansas lawyers seemed upset in varying degrees that Barrett was challenging White on her use of a professional name instead of her married name of "Lengefeld." One male lawyer literally screamed "BOGUS" when this part of the lawsuit was mentioned. And a female lawyer told us that no Arkansas court would make a woman use her husband's name if she had always practiced law under a professional name as White had done.

Five lawyers said this element of the lawsuit was doomed from the start. That's because they said Judge Tim Fox had boldly ruled for the rights of people who are viewed to be oppressed in the past, including a controversial ruling on birth certificates for same-sex couples and ruling against Arkansas' voter ID law. Therefore, the lawyers said, there was no way Judge Fox would rule that a woman had to use her husband's name when she had always used her professional name as a lawyer and judge.

What comes next: The two candidates will have to work hard with old-fashioned retail campaigning. The judicial race covers 15 counties in western Arkansas, and this election could end up more closely resembling a US congressional race rather than a traditional appeals court election.

It appears that Emily White is making more campaign stops at the moment, but this is probably due to Barrett's previous focus on the lawsuit and the fast pace of her current job as prosecuting attorney.

Who's up; Who's down:
➼ Emily White is UP this week because 1) She was not removed from the ballot as Barrett wanted, and 2) Judge Fox allowed her to use her professional name of "White."

Also, White seems to enjoy campaigning at even the smallest gatherings, and this race may be decided by a few votes.

➼ Stephanie Potter Barrett is UP this week because her campaign was also saved by the ruling of Judge Tim Fox. Still, Barrett must let her friends and neighbors in Miller and Lafayette counties understand the difficulty of this election.

There seems to be a feeling in the Texarkana area that Barrett is going to easily coast to victory. That's just not true. Barrett's large group of supporters in her sphere of influence might be more willing to volunteer and donate money if they knew that the election was (at best) a draw right now.

We know: The race between Emily White and Stephanie Potter Barrett could even get more interesting, so hang on and watch what happens next. Right now, it seems destined to go down to the wire. However, no one can predict what will happen in the next three months. Stay tuned.

Correction: Apologies, dear reader. I previously mentioned, "Republican primary" instead of the "non-partisan primary" of this judicial race in Arkansas. Thanks to all of you who wrote in to let me know about my mistake!