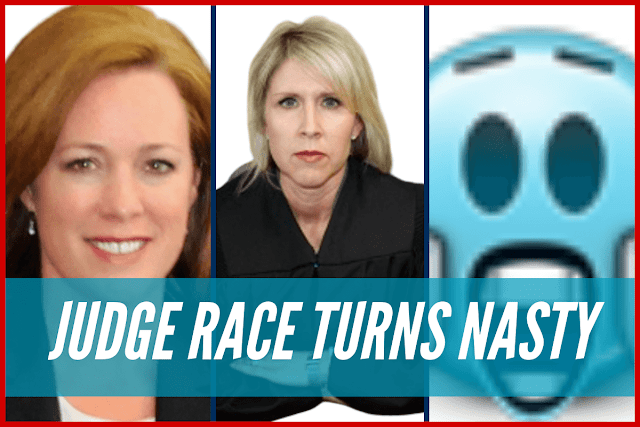 Editor's note: This is the first in a series of opinion columns on the race for Arkansas Court of Appeals District 4, Position 2 by BJ Jones. We operate under the "horserace political journalism" style to determine who's up and who's down. This article will appear in news outlets in both Texarkana and Hot Springs.

It is 105 days until the election between Miller -  Lafayette Prosecuting Attorney Stephanie Potter Barrett and District Judge Emily White.


Tensions are running high due to a lawsuit and various allegations of possible election lawbreaking.


➡Stephanie Potter Barrett is a highly respected and popular prosecutor in the Texarkana region and is seeking a sought-after appeals court position for 15 counties in western Arkansas. Her family is well known for producing lawyers that live and work in the Four States area.


➡Emily White is a highly regarded district judge in Southwest Arkansas. Her campaign slogan is "Faith, Family, Service." White says her family has lived in the Hot Springs area for more than 100 years. She also looks and sounds like a judge straight out of central casting.


But voters should prepare for a wild ride between the two legal powerhouses. That's because this "nonpartisan" judicial race has already proven to be a barnburner.

It started with a war of words between the two candidates in the state newspaper. Now, there is a lawsuit from Barrett seeking to have White removed from the ballot entirely.


How it all began: The problems between the two candidates started in late August 2019 when Prosecuting Attorney Barrett was involved in the murder trial of Marvin Arrell Stanton, who was convicted and sentenced to life by Circuit Judge Kirk Johnson.

According to Stanton's attorney, Barrett's campaign materials for the appeals court were near the metal detector at the courthouse. One juror and four prospective jurors ended up signing the prosecuting attorney's candidacy petition — as reported by the Arkansas Democrat-Gazette.

Back and forth criticism: Judge White criticized the Barrett campaign in the news article for having campaign literature and a voter petition at the courthouse in front of jurors. But Barrett said Miller County Judge Cathy Harrison had authorized it.

At the same time, Barrett alleged that White was violating a judicial rule (Rule 4.1) by wearing the traditional black robe in photos on social media promoting her campaign.

The Texarkana News spoke with Stanton's defense attorney, Jeff Rosenzweig. He said: "Our position is that the campaign materials being in front of jurors is totally wrong and illegal. It will entitle Mr. Stanton to a new trial."

Why it matters: If Stanton is granted a new trial before the election on March 3, Barrett might be blamed by voters for the cost of the further proceedings. Plus, it would be Stanton's fourth trial after several other setbacks.

What's at stake: This contest could potentially be like no other in recent Arkansas history. There are many stories and subsets of stories that could take this race in a different direction at any time to allow either candidate to win.

The race has been remarkably volatile so far. Two of Arkansas' most promising legal talents are facing off in a race that has taken a hard turn in record time.

Both candidates also have vast bases of support, and the dueling groups will make for an exciting campaign.

Dig deeper:
1. Article from the Arkansas Democrat-Gazette about the August 2019 Texarkana trial discussed above.
2. Facebook page for the campaign of Prosecuting Attorney Stephanie Potter Barrett.
3. Website for the campaign of Judge Emily White.
4. Read our next article in this series: "Stephanie Potter Barrett's lawsuit against Emily White has been decided by a Little Rock judge"

Take our poll: Who do you support for Court of Appeals — Barrett or White? We want to know. Choose your favorite candidate below.