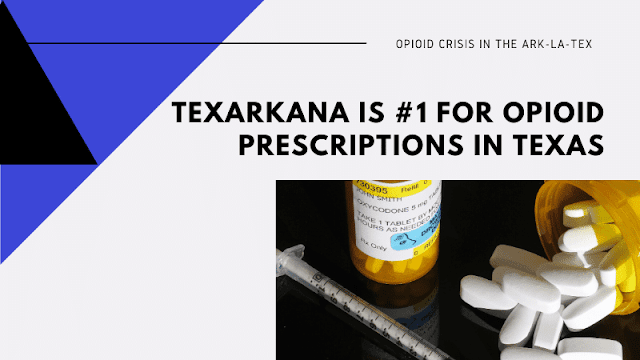 A bombshell, recent research project has shown that Texarkana, Texas and its fellow cities in Texas' 4th Congressional District have the highest prescription rate of Opioid drugs in the entire state.

As "National Drug Take Back Day" is being held this Saturday, the Opioid crisis is being talked about across the Twin Cities.

The information about the high presription rate in Texarkana, Texas came to light in a recent study of Opioid prescription rates in a peer-reviewed study (click here) published by the American Journal of Public Health.

However, the news gets even worse for the Texarkana area.

That's because Texarkana, Arkansas, and Arkansas' 4th Congressional District had an even higher prescription rate than Texarkana, Texas and its congressional district — which had the highest numbers per capita in the state of Texas.

According to the authors, Texarkana, Texas and the 4th Congressional District (represented by John Ratcliffe) were estimated to have 89.67 Opioid prescriptions for every 100 citizens.

The study focused on legally-obtained Opioid prescriptions written in each USA congressional district during the year 2016.

In Texarkana Arkansas and the 4th Congressional District (represented by Bruce Westerman), the prescription rate was even higher than the actual number of citizens with 115.92 Opioid prescriptions for every 100 people.

Although these numbers may be shocking to most people, it should be noted that law enforcement has already noticed the problem in the Four States region.

Evidence of intense interest from local prosecutors was on full display just two weeks ago as Texarkana doctor Lonnie Parker was arrested on October 8 for alleged overprescribing. This was followed by a strongly-worded public announcement and warning about future prosecutions from the US Attorney for the Western District of Arkansas, DAK Kees.

Parker, the Texarkana doctor, was alleged to have prescribed 1.2 million doses of Opioids to more than 15,000 patients over 2 years.

The stated purpose of the Opioid research was to find out the extent of prescribing rates across all congressional districts in the United States by using an observational cross-sectional framework obtained from secondary data and then weighted by utilizing population data.

One reason for this could be the higher number of doctors per capita in more rural areas of the country in the South, the rural West, and Appalachia.

According to the authors, the study was organized by congressional district because so the statistics could be used as a "policy-relevant boundary." This, in turn, could be further studied to monitor areas of potential crisis and possibly highlight areas where money should be sent on prevention.

High Opioid rates in the Ark-La-Tex

Based on findings from the study, it seems likely that the Texarkana area actually has an even higher Opioid prescription rate than other fellow cities in Texas' 4th Congressional District, such as Sulphur Springs, Mount Pleasant, and Rockwall.

That's because the Opioid prescription rate is significantly higher in the congressional districts of the three states immediately adjacent to the area around the border city of Texarkana, Texas.

In all three states surrounding Texarkana, Texas the Opioid prescription rate is higher than any congressional district in the entire state of Texas.

For instance, Arkansas' 4th Congressional District (which includes Texarkana, Arkansas) is tagged with an alarmingly high rate by the study: 116 Opioid prescriptions for every 100 citizens in 2016.

Likewise, the Shreveport-Bossier area's 4th Congressional District (represented by Mike Johnson) has an Opioid prescription rate of 103.26 per 100 citizens.

Even the 2nd Congressional District of Oklahoma (represented by Markwayne Mullin), including Idabel and Broken Bow, has an Opioid prescription rate of 92.09 per 100 citizens.

What can be done?

Dozens of bills have passed the US House of Representatives to try and curb what many now describe as the "Opioid crisis."

But legislation can't solve every problem, and experts say prevention of Opioid abuse starts at home.

An October 22 article by the news editor of the American Medical Association estimated that 90% of people who need substance abuse treatment do NOT get it. (click here to read full article).

One way to stop Opioid abuse from starting in the first place is by removing and safely discarding unused or partially used prescriptions from the medicine cabinets.

Now is a great time to do it, because National Drug Take Back Day is scheduled for this Saturday. Click here to find the nearest collection site.

The arrest of Dr. Lonnie Parker is already having reverberations across the states of Texas and Arkansas, and the news was proclaimed by local TV newscasts in the largest cities of both states.

Likewise, it is safe to assume that local doctors in the entire Ark-La-Tex region have already begun to realize that prosecutors are watching the number of Opioid prescriptions they write and the percentage of patients in their practices who get them.

Whether or not he is found innocent or guilty, Dr. Parker's arrest is the most unambiguous indication yet that the Texarkana-area is starting to seriously address the problem of potential overprescribing of Opioid drugs.

However, the common sense of our trusted local medical professionals will likely help get the Texarkana-area to continue to move in the right direction on this front.

But the recent study shows that a decrease in the Texarkana area's Opioid prescription rate will take time and diligence to successfully and permanently solve.

Editor's note: Any person suspected, accused, arrested, or charged with a crime is presumed innocent if and until they are convicted in a court of law.