Arkansas' Jan Morgan sounds off on the upcoming election 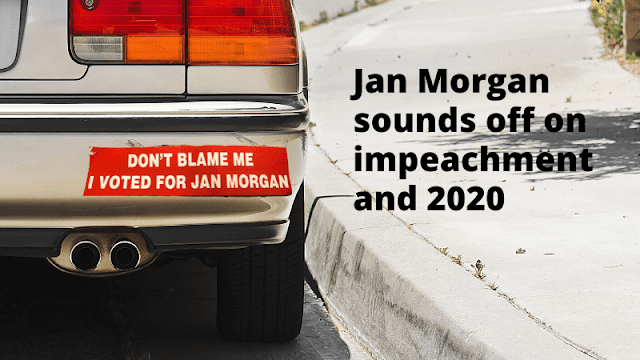 
Impeachment was on the mind of the former Texarkana KSLA-TV reporter this afternoon, especially since she is the national spokesperson for the group Citizens for Trump.


Morgan told us she was upset with the impeachment hearings and with Arkansas Governor Asa Hutchinson, who she said supports the impeachment inquiry. "Look it up," she told us. Morgan does appear to be right: The governor did tell citizens in Rogers, AR that the allegations should be taken "seriously" and that further investigation was warranted.

Chattering in Little Rock: Jan Morgan has an enthusiastic group of supporters, and this gives her a statewide platform. People have talked about her running for either Lt. Governor or the District 22 seat in the Arkansas House of Representatives which was held by Mickey Gates before he was expelled from the legislative body.

Why it matters: Jan Morgan told us we would have to wait and see what she is going to do on filing days, which begin November 4 and end at noon on November 12. She said she would run for office only if she did not see candidates who were vowing to uphold the Arkansas Constitution and the US Constitution.

What's at stake: Morgan creates a buzz wherever she goes. If she were elected to the Arkansas House, she would likely become one of the most well-known members very quickly. Also, Arkansas voters remember that being elected Lt. Governor can also lead to big things as it did for former Texarkana pastor and Arkansas Governor Mike Huckabee. We'll be watching.