The tradition of the Spirit Melon is now a part of everyday life for #HawkNation in Texarkana, Texas.

When did this rather new phenomenon start? Caven Carpenter tells us what we need to know:

How many watermelons do you know that have had a front-row seat at the AT&T Stadium in Arlington, The Ford Center at the Star, and Toyota Stadium in Frisco?

I’m guessing your answer is NONE.


Well, I know one very special melon that has had a huge role in the success of The Pleasant Grove Hawks.

I know you're thinking that I am superstitious. However, I just know what works!

"The Legend of the Melon" started in Fall 2017 when the Pleasant Grove Showstopper Drill Team was preparing to decorate pumpkins for Halloween.

Whether by luck, chance, or destiny, then-sophomore Chloe Carpenter was unable to find a suitable pumpkin.

But there it was... all alone and somewhat out of place. No one knew it then, but it was the future of Hawk Football: A small watermelon???

It was like finding the perfect pet at the animal shelter. But according to Chloe, it cried out to be taken home and decorated.

“HAWK NATION BABY!” is a simple phrase that most people in the Texarkana area are familiar with, and this was written across what we now know as THE SPIRIT MELON.

Chloe had an idea that gained the encouragement of fellow Showstoppers Rachel Hemphill, Kathryn Davis, and Cara Anne Court.

These young ladies decided that the Spirit Melon should sit in a place of honor with the Showstoppers at the next Friday night football game.

The Spirit Melon makes its debut

On October 20, 2017, the Spirit Melon made its first appearance at Hawk Stadium. Even though it now has legendary status, no one quite knew what to make of it before Oct. 20.

But guess what? The Spirit Melon was right there as the Hawks literally destroyed the Atlanta Rabbits in a 48-17 game.

What now?  Surely these Showstoppers were in no way superstitious?  You bet they were!

The Spirit Melon might as well have been given the Showstopper's trademark white cowboy hat and white boots because it was now part of the team.

The football schedule rolled on, and the Spirit Melon traveled to places like The Ford Center at the Star (twice), Paris, Sulphur Springs.

At the same time, the Hawks kept winning BIG.

Right there during the bus rides, stretching, and stadium dances, the Spirit Melon’s spell over the Hawks and their opponents was turning skeptics into believers.

THEN THE BIG ONE!

Hawk Nation traveled where it had never played before: AT&T Stadium, Jerry’s World, The Ship.

Right there in the lower deck of AT&T, the Spirit Melon proved its power.

Everyone now believes it helped the Hawks beat West Orange-Stark which in turn ended their 40 game winning streak.

At the same time, The Grove brought home its first-ever State Football Championship.

In 2018, the myth surrounding the Spirit Melon took a turn for the surreal.

The Hawks lost their first game to Gladewater.

But talk among the Showstoppers was that the Spirit Melon must live on.

Then out of nowhere, a strange, grainy video of Chloe Carpenter destroying the Spirit Melon arose on social media.

People started asking questions: Who made this video? Where did it come from? Is that really Chloe destroying the beloved Spirit Melon?

The assassination of JFK, Area 51, O.J. Simpson's gloves are minor conspiracies compared to this.

Ask any Showstopper, and you won’t get an answer. So the mystery lives on...

In fact, most people now believe The Spirit Melon will never die.

That's because it made it all the way back to AT&T Stadium where the Hawks lost the State Championship to the Cuero (Jordan Whittington) Gobblers.

Like other famous sports superstitions — such as Tiger Woods wearing his red polo shirt on Sunday, the Curse of the Bambino, never talking about a no-hitter during the game — The Spirit Melon will live among the greats in Northeast Texas.

The Spirit Melon has come a long way since that Fall day in 2017 when it sat alone in the fruit aisle of a local Wal-Mart.

At that time, no one knew the lives it would change.

Yes, people and seasons come and go. But the Spirit Melon will live forever!

There's no doubt the Spirit Melon will be with the Showstoppers and the Hawks to the very end.

It will be in the middle of the field holding up another State Championship trophy.

LET’S GET THE SPIRIT MELON A RING THIS TIME. IT DESERVES IT. 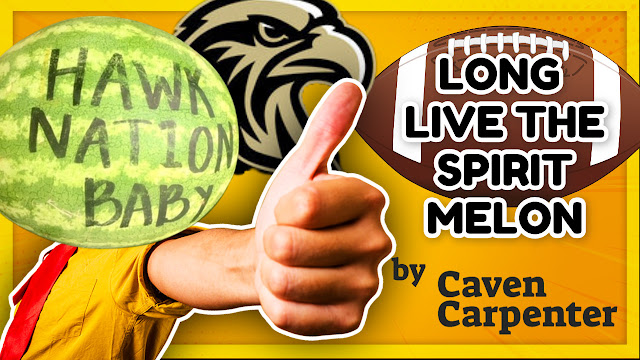 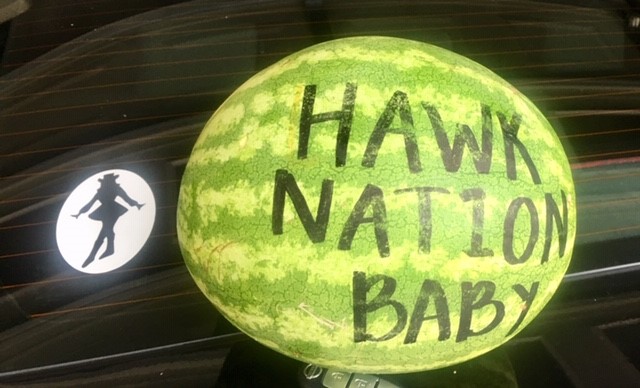