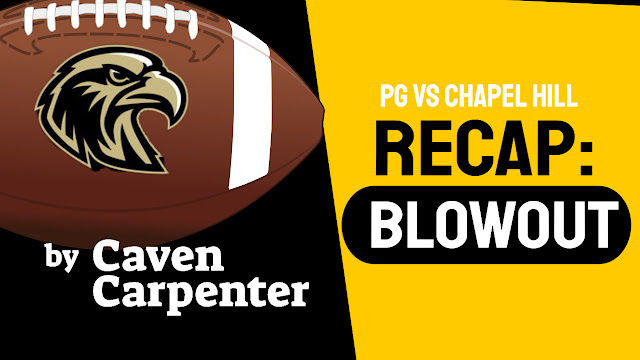 Caven Carpenter tells us what happened and why it matters as the Hawks prepare to take on Carthage next week.


The Pleasant Grove Hawks destroyed the Chapel Hill Bulldogs 63-21 Friday night in Tyler, but it could have easily been much worse!


Just the eyeball test could hold true with this game.

The Hawks were bigger, faster, and stronger.

Once again, the Hawks dominated on the ground with over 500 yards of rushing.

The offensive line did their job, and it looked like they did it with ease.

⦿ The Running Backs: There aren't many teams in East Texas that have running backs of the caliber of Pleasant Grove.

⦿ I also doubt there are many teams in this area that have three backs (Bruce Garrett, Logan Johnson, and KJ Hicks) that run a 4.5 40 yard dash.

⦿ Not many schools have a talent like Nick Martin who runs with speed and power and will play Division 1 football.

⦿ When one of those speedsters does not get the ball, the coaches can call on bruiser Shane Nelson to get the tough yards.

Two running backs that really impressed me last night were Senior Elijah Jackson (two touchdowns), and Junior Hayden Koller.  In games like this, it looks like Coach Josh Gibson is running up the score, but when you have back-ups that are talented enough to start on other teams, scoring comes too easy.

I could ramble on all day about the talent on this defense and how well they played, but here is what I saw.

In the first half, it looked like Alabama playing Southwest Central State!

One thing people may not understand, Tyler Chapel Hill is not a bad football team!

They will win some games this year and could be a playoff team.

Voices of the fans

You know your program is a legit powerhouse when you overhear fellow Hawk fans talking about next week's game before this game even started!

The mood in the stadium in the first half was pure excitement — a fun, a party atmosphere.

And then by the second half, the mood was "let's just get out of here with no injuries."

The Hawks had some players banged up.  KJ Hicks left the game in the third quarter after being on the receiving end of a cheap shot, and Nick Martin also left in the third with a mild ankle sprain.

People sitting around me started talking about Carthage early in this game, and I can’t blame them.

Another way to tell you have a legit powerhouse and a GREAT COACHING STAFF is that I doubt even one Hawk player said the word “Carthage” until the clock read “0.”

This is what the community, the school, the team, and frankly, Texas has been waiting for!

Six days until The Carthage Bulldogs come to Hawk Stadium. IT’S ON!!!

BRING IT ON DAWGS!