In the final series against Baton Rouge, the Texarkana Twins win by three runs.

The Twins get the sweep of the Baton Rouge Rougarou by winning 6-3.

There was a JR Homerun Derby before the game as the Twins wanted to give a chance for those younger players to hit on George Dobson Field.

The JR Homerun Derby was a big success as the Twins had almost 20 contestants in three different age groups. The winners of the derby got four tickets to the playoff game along with five kids zone wristbands to the game.

The Twins had another quick start to the game as they scored four runs in the bottom of the second inning.

All four runs came during a two-out rally that started with Mike Manetta getting hit by a pitch. Hudson Hopkins then hit a single, followed by an RBI single from, Shea Gutierrez.

Then after Gutierrez, Ryne Randle hit an RBI single. Christian Boulware was able to bring both Randle and Gutierrez home off yet another RBI single making the score 4-0. The Twins never looked back and kept the lead the entire game.

Usually, Lee Thomas is a force at the plate, but tonight he did his damage on the mound.

Thomas pitched 4 innings, with one earned run and 2 strikeouts for his efforts Thomas made his first win of the season.

Manetta was able to close out the game for the Twins on the mound only allowing one run in 2 innings of work.

Both of those games are against the Victoria Generals.

For more information about tickets to those games and more visit texarkanatwins.com or call  903-294-PLAY. 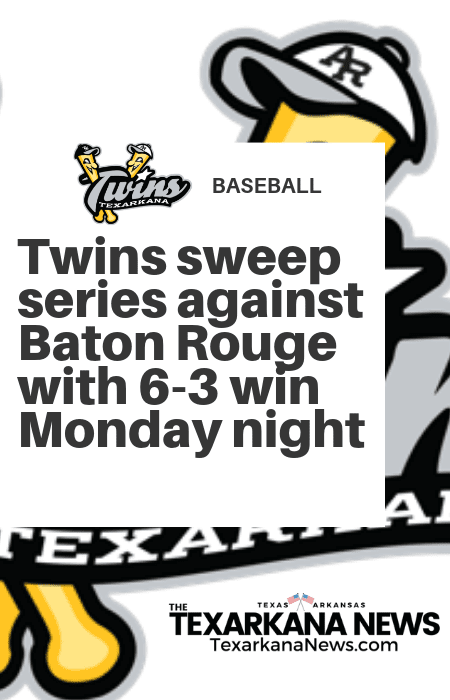