It was almost the comeback Texarkana Twins fans dreamed of last night as the team forced the game into extra innings.

Sadly, things didn't quite work out in the end. But it was still a game to remember.

For the second night in a row, the Twins were unable to complete the comeback against the Victoria Generals but this time fans were on the edge of their seat.

The game started roughly again for the Twins as the Generals were able to score 3 runs in the top of the first. The Twins were able to get one back in the bottom of the second making the score 3-1.

Going into the bottom of the eighth the Twins were down 7-1. The bats again were hot for a short period.

It all started with a JJ Flores single and got the rest of the team going as well. Harrison Engstrom hit an RBI double to scored Flores starting the comeback.

With Reese Durand up to the plate, he got ahold of a ball into right-center. Durand brought home two runs and made it to third himself. Durand was brought in by Mike Manetta on a fielder's choice. Then the bottom of the 9th hit.

Ryne Randle hit an RBI single to bring the Twins within just one run. Flores was up again looking to tie the game. Flores was able to hit the ball into left field and scored Randle tying up the game.

The run ended in the 10th as Victoria was able to score two runs in the top of 10 off Twins errors, as the Twins were unable to get any hits in the 10th.

The Twins are also hosting their first-ever playoff game Saturday, August 10. Admission into that game is free for anyone who comes, but it is first come first serve. 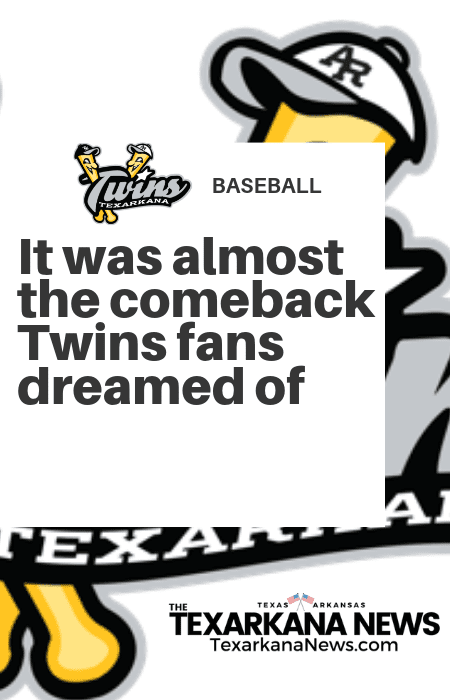