A local dad's mission against melanoma after his 21-year-old, athlete son dies 120 days after diagnosis 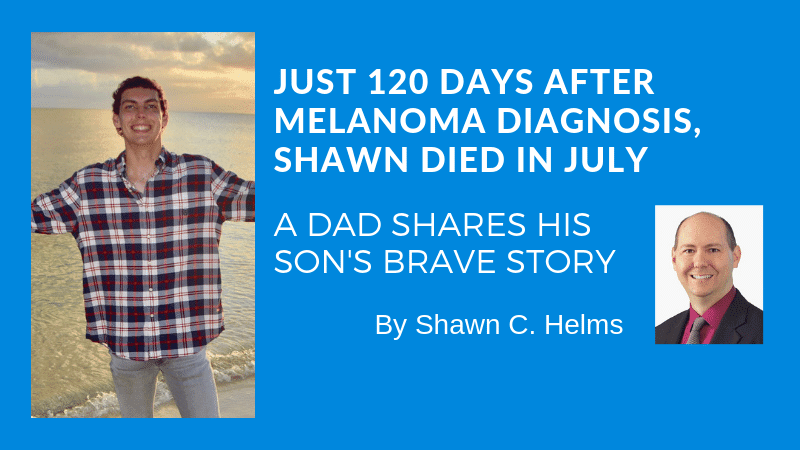 Editor's note: This is a heartfelt letter our sister publication, RockwallToday.com, received from Shawn C. Helms of Rockwall, Texas following the recent death of his son. It is the first in a series of three articles we will publish about Shawn, Jr., but it seemed appropriate that his father's words be heard first.

I am Shawn Helms, and I am writing to tell you about my son's story.

My wife Misty and I lost our son, Shawn Helms, Jr. at the age of 21, just 120 days after his diagnosis of melanoma skin cancer.

His memorial service was on Friday, July 19th at Lake Pointe Church in Rockwall, Texas.

So many people attended that they had to bring in more chairs.

The last few months have been a whirlwind of emotions – shock, disbelief, and devastation, just to name a few.

The rapid progression was startling. Shawn, Jr. was a very popular, healthy, athletic, and fun-loving young man that was loved by many.

Shawn, Jr. went to Rockwall-Heath High School where he played on the varsity basketball team — one of the best teams in the state of Texas.

He went on to attend Baylor University.

Until just a few weeks before his diagnosis, there was no outward indication of cancer progressing through his body.

The melanoma started on his scalp, hidden by his thick, black curly hair. We never knew it was there until it was too late.

By the time it was discovered, cancer had spread to several other organs.

Shawn fought bravely and maintained his faith throughout his journey.

When we first heard that Shawn, Jr. had melanoma, I was relieved because I thought it was “just” skin cancer.

It would be cut out, and we would move on.

Little did I know that melanoma is the most lethal form of skin cancer.

While melanoma accounts for only 3% of all types of skin cancer, it has the highest death rate of all types and is more likely to metastasize (spread) in the body.

In these blazing summer months in Texas, people are often in the sun.

Nearly 90% of melanoma cases are caused by exposure to UV light and sunlight.

Many people do not know that sunscreen and limiting exposure to the sun, and tanning beds can prevent most occurrences of melanoma.

The faith of Shawn, Jr.

One evening, when talking to me about his diagnosis, Shawn, Jr. said that he did not know what would happen, but that he believed that good would come from this terrible situation.

He told me he believed having cancer would result in something good in his life, our lives, and/or for the greater good of God’s world.

Days after Shawn, Jr’s death in July 2019 we started the Helms Hope Foundation at HelmsHope.org.

This is a non-profit organization, formed in Shawn’s honor to turn our family’s devastation into hope for others.

Unlike most other non-profits, for the first year, Helms Hope will not direct any funds donated to operating expenses. Those expenses will be covered for the first year by the family in celebration of Shawn, Jr's life.

In other words, in this first year of operations, every dollar donated will be spent to directly fight against melanoma.

Find it early, save a life

Melanoma is completely curable if detected early. Awareness and early detection can save lives.

We are working to develop programs with professionals that are in a unique position to help identify potential skin cancers, such as hairstylists and massage therapists.

By utilizing non-traditional avenues for detection, we hope to increase the chances of early melanoma detection.

What you can do


More information about Shawn, Jr. can be found on the heart-wrenching blog written by Shawn, Jr.'s father during his son's brave, 120-day fight at www.shawnhelmsjr.com or the foundation website at https://www.helmshope.org/shawn-jr.