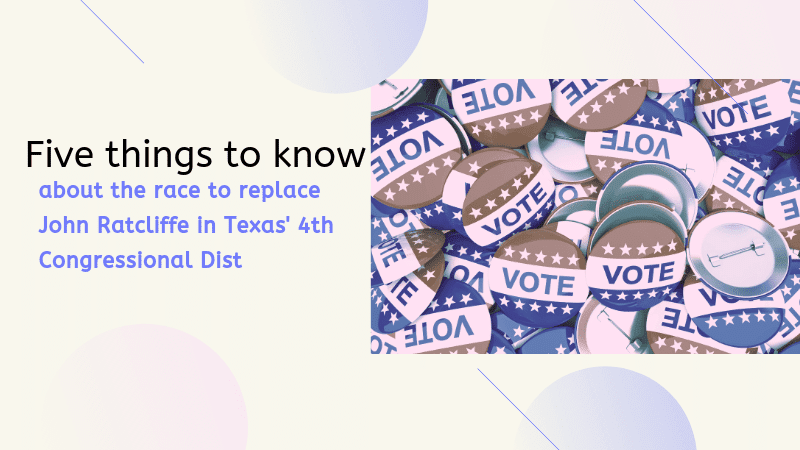 The race for United States Congress in Texas' 4th Congressional District begins today as President Trump has confirmed he is nominating Rep. John Ratcliffe to the position of Director of National Intelligence.

Dan Coats, the existing DNI director is set to leave by August 15, so a vacancy will exist after confirmation of Ratcliffe which is expected to be swift.

Here are 5 things you need to know about the race to replace John Ratcliffe:

1) The race begins TODAY
Several people in the district have been discussing the imminent departure of John Ratcliffe for some time.

Rep. Ratcliffe was on the shortlist for U.S. Attorney General, and many people believed he was going to be chosen. He wasn't, and William Barr became AG. However, some would-be candidates began whispering a few months ago about their future plans.

2) It is all but guaranteed there will be a special election
A vacancy in the U.S. Senate is often filled by appointment from the governor of the state which loses a senator. However, an empty seat in the House of Representatives requires a special election as set forth by the U.S. Constitution (or waiting until the next election).

Don't expect Gov. Abbott to wait until Nov. 2020 for Northeast Texas to elect a new member of Congress.

Therefore, there will be a costly special election. Millions of dollars will be spent trying to secure the open seat in Texas' 4th Congressional District.

3) Whoever wins could be in Congress for a very long time
An open seat in a U.S. Congressional race in Northeast Texas is exceedingly rare, and members of Congress in the area are some of the longest-serving in the history of the United States.

More recently, Ralph Hall served from 1981 to 2015 until he was successfully primaried by Republican John Ratcliffe.

4) Jimmy Carter was president the last time there was an open seat in Texas' 4th congressional district
Rep. Ray Roberts served from 1961 until he was replaced in the 1980 election that resulted in Jimmy Carter being replaced by Ronald Reagan.

5) Expect many candidates — both Democrat and Republican
Because of the rarity of an open seat, there will no doubt be a long list of candidates for Congress.

Most of the real action and money will be spent on the Republican side of the aisle. However, don't count out high-spending by a self-funding conservative Democrat from making waves as well.

However, Beto O'Rourke did not perform exceptionally well in TX-4 in his race against Ted Cruz. O'Rourke polled around 30% in Rockwall County and about 28% in Bowie County (Texarkana area). And those were his two of his highest-performing counties in the congressional district.

The Fourth Congressional District is a highly pro-Trump congressional district. With 75% of the vote in 2016, Trump polled higher than former Texas Gov. George W. Bush ever did. Bush managed his highest polling of 70% total in TX-4 during his 2004 in his race against Sen. John Kerry of Massachusetts. However, Trump beat Bush by five points in 2016.

This means that the race for the Republican nomination might come down to a hardcore Trump supporter. No doubt, potential candidates are scrambling to erase their social media accounts of any criticism that can be construed as critical of the president, who is very popular in the district.

Don't completely count out a Democratic candidate from doing well in a special election. Democrats are highly engaged, and Texarkana's own Mike Huckabee won the Lt. Gov. race in an Arkansas special election that Democrats should have won.

Fewer voters turn out for special elections, and a well-funded Democratic candidate could win. However, it would be highly unlikely because of the vast majority showcased by Pres. Trump in 2016 and Sen. Cruz in 2018.

CONCLUSION
The race for Congress is happening right now on telephones all across Northeast Texas and Washington, D.C. It would be fair to expect that a Ratcliffe loyalist might have a plan to run for the seat, but an endorsement is probably unlikely from the soon-to-be ex-congressman since Ratcliffe will be a government and administration employee as DNI Director (and therefore subject to Hatch Act restrictions).

Stay tuned. The race for TX-4 will be a wild ride.

Editor's note: We will be providing daily coverage of the race for Texas' Fourth Congressional District along with our media partners in Paris, Sherman, and Rockwall.