Ross Perot was (and is) Texarkana's greatest champion 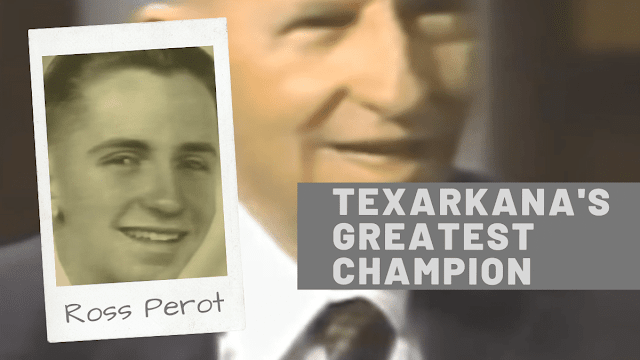 Even in death, Ross Perot is still the greatest champion of Texarkana, Texas.

Indeed, the businessman may have been a billionaire and a pioneer of the computer industry, but he never forgot the town where he was born, raised and educated.

Over the years, Perot has given countless interviews about growing up in the Twin Cities, which bestowed on him a lifetime of colorful anecdotes. He has said that everything he learned about business was at his father's knee in Texarkana.

As we look back on Ross Perot's contribution to Texarkana, the state of Texas and the nation, here is an insightful interview into his early life in Texarkana in his own words.

Perot gives a detailed account of his upbringing in Texarkana, Texas. He shows a deep passion for the community and an intense pride in the place he always thought of as home due to his close relationship with his parents and Texarkana friends on both sides of State Line Avenue.

And no one could tell a story quite like Ross Perot with his distinct Texarkana-region accent that never, ever changed.


The computer businessman turned presidential candidate was born and raised in Texarkana to a local cotton trader and loving mother whom he called a "saint." Perot died after a short battle with leukemia that was diagnosed in Februbary.

Ross Perot valiantly fought the battle with the disease. Throughout the illness Perot would show up most days for work as always, but a serious infection caused major problems for him one month into the diagnosis.

The influence of Ross Perot within the Four States area has been great for some time. Over the years, he and his family have given back to the community in numerous ways, supporting local institutions such as the Perot Theatre, Texas High School and Texarkana College.

Here is the second half of the discussion with Ross Perot about his life: