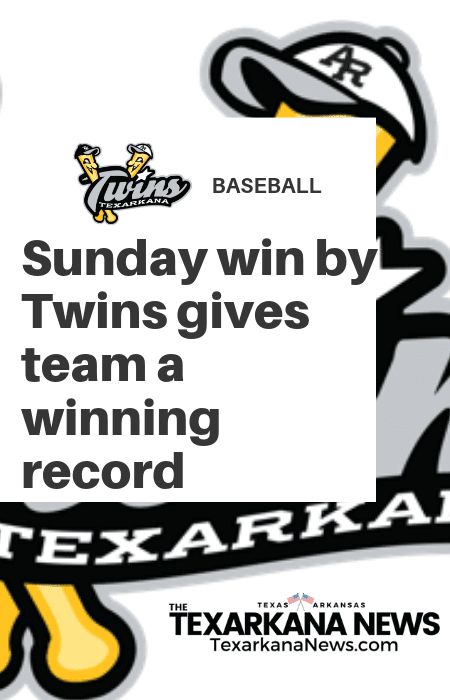 Victory was sweet for the Texarkana Twins as they came back in the 9th to eek out a squeaker for their 13th win.

The Texarkana Twins were in Victoria, Texas this evening, and the (13-12) offense woke up in a big way tonight in their 7-6 win over the Victoria Generals (21-10).

They were able to put up 7 runs which was more than they had scored in their last 4 games combined and it all started in the 3rd Inning.

After the Generals scored a run in the first to take an early 1-0 lead and a blank second, Catcher Christian Boulware came up to lead off the Twin’s Inning and hit a single to start.

After being advanced by 2 Groundouts, Reese Durand came up to bat with a man on 3rd and 2 Outs and proceeded to hit an infield bloop single to drive in the Twins first run of the game and tie the game.

However, that lead did not last long as the Generals answered with one in the Bottom of the 3rd but then the Twins offense really woke up as they came back for the 4th.

They then plated 4 runs with key 2 Out 2 RBI hits by Outfielder Noah Sifrit and Tom Lichty, who extended his hitting streak to 13 in the process, to give the Twins a 5-2 lead. That lead held throughout the end of the 4th and 5th but disaster struck in the bottom of the 6th.

The Generals plated 4 runs of their own to take another one run lead by the score of 6-5. Then after a scoreless 7th and 8th Innings and with 2 Outs in the 9th, all hope seemed lost.

But then a singles by Durand and Ryne Randle and a stolen base, put 2 runners in scoring position for Shea Gutierrez.

After working the count to 3-1 Gutierrez slapped a ball back up the middle past the Shortstop Robertson to bring home both runners and give the Twins the lead!

Joseph Standley returned for his second full inning of work and shut the Generals down to give the Twins the win!!

The Twins finish this series against the Generals in Victoria tomorrow night before finally traveling home to take on the Baton Rouge Rougarou starting on July 9th.

Editor's note: For more information about tickets to games and more visit texarkanatwins.com or call 903-294-PLAY.