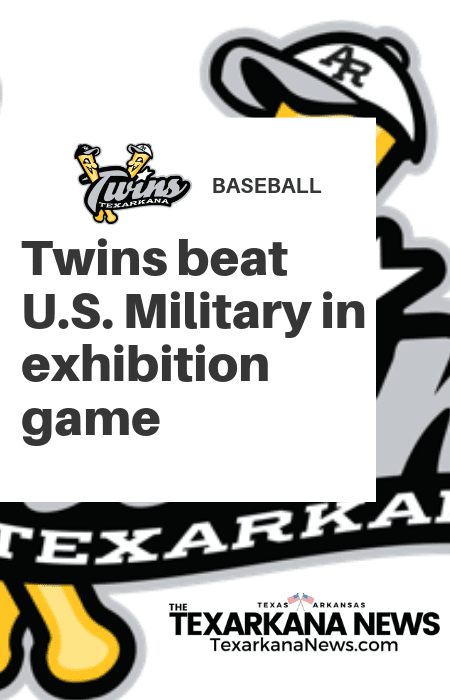 The Texarkana Twins beat the U.S. Military. Yes, you read that right.

In a crazy night that included Plate Appearances by Matt Sesler, Joseph Standley and scoreless Innings tossed by Steven Bonuz and Lee Thomas, the Twins were able to shutout the visiting U.S. Military Baseball Team in their exhibition game.

It was an emotional start even before the game even began as the Active Duty members of the U.S. Military Baseball team passed a folded American Flag as Old Glory played as a tribute to the members of the U.S. Armed Forces that made the ultimate sacrifice for freedom.

Then we were treated to a wildly fun game as the Twins got their offense back on track by scoring 7 runs. They scored one in the first inning when Matt Kissamis was able to come home on a Throwing Error by US Military starter Benny Avila.

Then in the third they put up 3 runs including a critical Double by their new catcher Jake Taylor that brought allowed 2 runs to come across and then scored the third run himself when brought in by fellow, Oklahoma State Cowboy, Noah Sifrit.

They also managed to score 3 in the 5th inning without even getting a hit! As a combination of 3 walks, 2 Hit By Pitches and a wild pitch gave the Twins a 7-0 which they would keep until the end of the game.

Things started to get weird in the later innings though as Lee Thomas took the mound in the Fifth and pitched a scoreless inning and got himself a pair of strikeouts to go with it.

We also had multiple pitchers get an At Bat by 4 different Twins pitchers. Unfortunately none of them were able to get on base but it added a lot of fun to the game for both the players and spectators in attendance tonight at George Dobson Field.