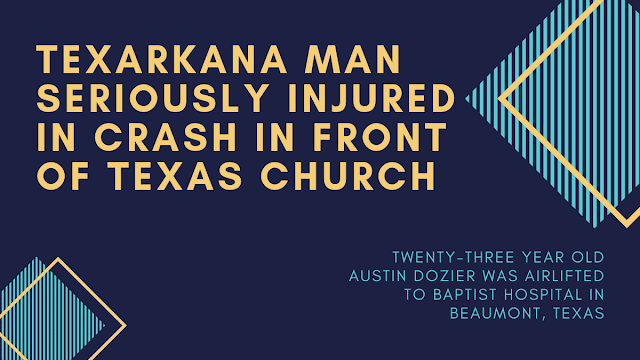 The Texas Department of Public Safety is reporting that a Texarkana man, Austin Dozier, of Texarkana has been seriously injured earlier today in a head-on collision and taken to a local hospital via helicopter

"At approximately 12:30p.m., the Texas Department of Public Safety (DPS) received a report of a head-on collision on SH 62 in Jasper County," the DPS said.

"The crash occurred in front of Faith Baptist Church on SH 62 in Buna, Texas," a DPS official added.

The preliminary investigation report indicates that a 2018 Dodge Charger was traveling southbound on SH 62.

A 1989 Toyota pickup truck was traveling northbound on SH 62. The driver of the Dodge observed a slow moving vehicle in the southbound traffic lane and veered to the left to avoid a collision.

The driver of the Dodge crossed into the northbound traffic lane and collided head-on with the Toyota.

The driver of the Toyota, 23-year-old Austin Dozier of Texarkana, was transported by medical helicopter to Baptist hospital with serious injuries.

The driver of the Dodge, 22-year-old Bailey Brianna Stewart of San Marcos, was transported by ambulance to St. Elizabeth hospital.

Her injuries did not appear to be life threatening. All information is preliminary as Troopers continue to investigate this crash. There are no additional details available at this time.